KARWAR:Tension prevailed in Bhatkal on Thursday after protesters pelted stones on the Bhatkal Town Municipal Council (TMC) office.Earlier in the day, Bhatkal TMC started evicting its 34 illegally occupied shops. Ramachandra Naik,  a shopkeeper, set himself ablaze in front of Council officials opposing their move.  His brother Eshwar Naik, who went to rescue him, was also injured.

Ramachandra, who sustained more than 50 per cent burns while Eshwar suffered minor burns. Following the incident, a bandh like situation prevailed in the town after people pelted stones at the TMC office and set fire to tyres. Most commercial establishments downed shutters  and locals along with BJP and Sangh Pariwar activists staged a protest.The Uttara Kannada district administration deployed hundreds of police personnel to control the situation. Despite pelting of stones on the government properties for several hours, police did not cane the protesters.

The protesters held the deputy commissioner responsible for the situation and threatened to block National Highway 66 (Mangaluru-Mumbai Road) if he did not visit the spot.Additional Superintendent of Police Gopal Byakod and other officers controlled the mob which was turning violent. Later, DC S S Nakul and SP Vinayak Patil visited the spot and held a meeting with the protesters.

Nakul told Express, “On the direction of the High Court, the state government has instructed us to vacate these shops. The lease period of all these shops ended in 2011. Though we auctioned these shops in 2016, they did not allot new leases. Five days back when the officials went to vacate the shops, the venders sought another five days’ time. When they went again on Thursday to clear the shops, one of the vendors set himself ablaze.”

“At present, we have stopped vacating of the shops for the time being. We have talked to the protesters and the vendors. If they have any document related to the shops, they can approach us, and we will help them within the limits of law. If they do not have any documents, we are helpless,” he added. 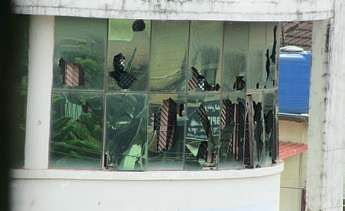 Karwar: Ramachandra Naik sells sugarcane juice and tender coconuts at a TMC shops, along with his elder brother Venkatesh. In 2011, after the direction of Supreme Court of calling fresh auction of the municipal shops, the TMC auctioned most of them in August 2016. While some of the shopkeepers approached the High Court and got a stay order, 34 did not. Last week, TMC officials went to vacate these shops but the vendors staged a protest. TMC officials gave five days for them to vacate. On Thursday morning, the TMC was planning to vacate the shops and when officials gathered at the spot Ramachandra set himself abalze.TMC revenue officer Dileep Naik said, “Ramachandra has no shop here. His brother has two shops. When we were on the otherside of the building, Ramachandra suddenly set himself ablaze,” he added.