While the BJP is ahead in terms of presence and following on social media platforms, the Congress and the JD(S) are pushing aggressively for online outreach before the Assembly polls.

BENGALURU: The major political parties of the state seem to have learned from their past mistake of ignoring the importance of social media outreach during elections. Now, taking a leaf out of BJP’s book, both the Congress and the JD(S) are pushing aggressively for online outreach in time for the Assembly elections early next year.

While the parties had initially stressed on improving their presence on social networking platforms such as Twitter and Facebook, now the push is towards the instant messaging service WhatsApp.

The change is due to a recent realisation that WhatsApp is more effective in reaching out to the grassroot population than any other social media tools. Despite efforts to ramp up their social media wings, leaders from both Congress and JD(S) acknowledge that BJP has a clear headstart in this regard as they were the first to have IT and social media cells.

Balaji Srinivas, convenor of BJP’s social media cell, told Express that while social media outreach might be new for other political parties, BJP has used it extensively even during the previous elections in Karnataka.

“This time around, we expect the impact of such tools to be greater than it was during the last elections. Good internet penetration and wide usage of smart phones will help the trend,” he said.

Noting that there were about 3,000-4,000 BJP groups in WhatsApp already, Balaji added that they were looking much beyond that. The BJP had set a target of 5,000 WhatsApp groups and had trained several volunteers in a social media conclave held on August 6.

Karnataka Pradesh Congress Committee working president Dinesh Gundu Rao acknowledged that the BJP was ahead of them in this aspect. “We have realised that WhatsApp as a social media tool has more reach at the ground level, followed by Facebook. We are charting our strategy based on these observations,” he said. To a question, he said that despite the seemingly large following for the BJP and its leaders on Twitter and Facebook, most of of them were ‘ghost followers’. “People will vote for the works taken up and schemes implemented in the state.

The Congress will use social media to highlight our achievements and counter the false narrative against the state government by opposition parties,” he said.

Despite claims of JD(S) being the first party in Karnataka to have a social media presence, the party has relatively less traction in social media than BJP or Congress. “We have a clear social media strategy for the upcoming Assembly polls as many volunteers are pooling in their efforts to present our policy proposals ahead of the elections,” said MLC Ramesh Babu.

Alleging that both BJP and Congress were resorting to paid propoganda in social media, he said JD(S) workers were promoting the party online voluntarily. “There are a few Twitter handles under the name of party national president H D Deve Gowda, and several groups of JD(S) on Facebook. But, our presence is more in WhatsApp,” he added.

Despite these claims, there are neither verified profiles of any prominent JD(S) leader in either Facebook or Twitter. Meanwhile, fireworks have begun with parties stating that their social media cells are volunteer- driven compared to their rivals, who have vendor-driven cells, to push their political agendas. 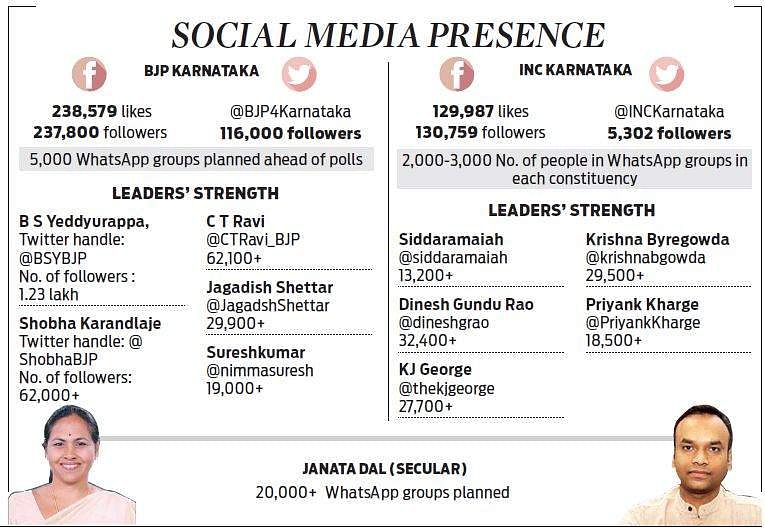