BENGALURU: Brace for dark days as thermal power generation units are facing acute shortage of coal, raising concerns of a power crisis.  Senior officers in the state government termed it as a “super critical” phase and said the state may face a power shortage if supplies do not resume in a day or two.
According to Central Electricity Authority guidelines, it is recommended to have 30 days of coal stocks. Even 10 days’ stock is termed comfortable. “We have just a day’s stock,” a senior official said.

Karnataka Power Corporation Limited (KPCL) generates power from thermal, solar, hydel and wind. In September, on an average, 154.38 Million Units (MU) are generated daily of which 29 MU is from thermal plants, 22 MU from hydel and the remaining by other means. Karnataka’s daily coal requirement is 52,000 tonnes. The Raichur Thermal Power Station, with eight units, has a total capacity of 1,720 MW and requires 30,000 tonnes of coal per day.  The Ballari Thermal Power Station requires 22,000 tonnes of coal a day.

Since Karnataka does not have its own coal mines, it is dependent on coal mines outside the state. A large chunk comes from Western Coal Fields Limited (Maharashtra) and Mahanadi Coal Fields (Odisha). Some amount of coal is also supplied by Singareni Coal Mines (Telangana).

Additional Chief Secretary (Power) Rajneesh Goel admitted that there is shortage of coal supply for thermal plants and it is alarming. According to KPCL sources, it is normal for coal production to decrease during rainy season. But this year thermal stations are generating to the full capacity as hydel stations which generate maximum capacity during rainy season are generating less power due to below normal rainfall in catchment areas of dams. Also, compared to earlier years, there seems to be a huge deficit in coal supply this year. 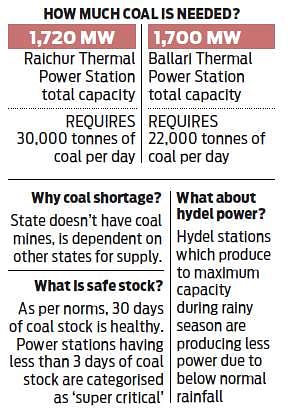