It’s a hop, skip and jump along Infantry Road

One of the arterial thoroughfares in the heart of the city, Infantry Road houses major establishments like the Office of the City Police Commissioner, Department of Information and Public Relations, T

BENGALURU: One of the arterial thoroughfares in the heart of the city, Infantry Road houses major establishments like the Office of the City Police Commissioner, Department of Information and Public Relations, Traffic Management Center apart from private businesses. While vehicles zoom along, pedestrians are forced to navigate an obstacle course with two-wheelers, four-wheelers, tempos and mini vans occupying all of the footpaths and the pavement slabs crumbling under their weight.

Right opposite the police commissioner’s office, a police outpost, with wires jutting out, sits on the footpath. The pavement slabs are what was left from repeated patch work and pieced together. On the opposite side, right outside the Chevron hotel, roots of a giant tree are covered with debris to give a semblance of a footpath. 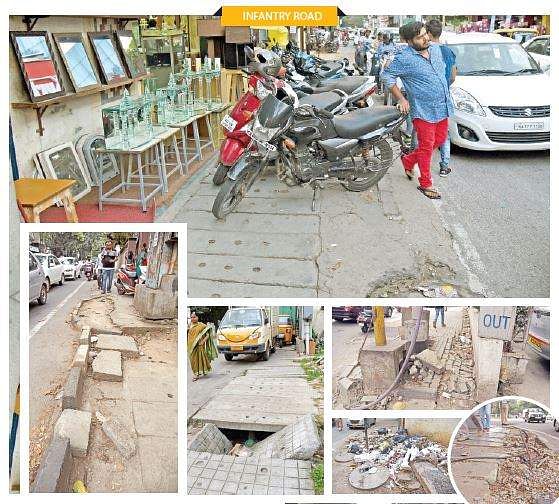 A little further down the road, the kerb stones outside Embassy Icon are missing. The ones that have come undone are more dangerous for walkers. A large spool of power cable awaits fixture while occupying the entire footpath next to Hotel Nisarga. Customers have to squeeze themselves between cars parked beside the footpath and the spool of cable.

The footpath running alongside Coffee Board has manhole covers jutting out right in the middle of the walkway making many trip and fall. Wherever a traffic light pole, streetlight and BESCOM junction boxes are installed together, the footpath is in a shambles as the slabs have not been relaid properly after the installation.

Mounds of garbage can be found just after the office of the Department of Information and Public Relations on Infantry Road. With construction activity going on at a Trust building, workers have dumped heaps of mud and cement on the footpath. As the road inches closer towards Shivajinagar bus stand, walkways are taken over by exhibits of furniture shops -- dining tables, sofas, chairs and tables.
Chandana Apartments is probably the only multi-storeyed residential building in the busy commercial area. A huge transformer occupies the footpath in front of the building. Due to lack of parking space inside the apartment complex, cars are parked on the footpath -- the effect of which is seen in the cracks and gaps along the walkway.

“The day is not far off when it’s going to become more and more unviable for a large majority of the population to take out their personal vehicles for their daily commute. And, in fact, that’s how it should be, since otherwise we are going to be increasingly getting stuck in our vehicles, just outside our gates on most weekdays. In such a scenario, the significance of proper pedestrianisation needs far more attention than it has been accorded so far,” said Muralidhar Rao, vice-president of Bangalore Apartments Federation and member of the civic advocacy group, Praja RAAG.