A ring with a million holes

BENGALURU: Potholes, damaged road and plants on the highway. Welcome to Bengaluru’s Outer Ring Road (ORR). The road that was meant to be a high speed corridor is as bad as the pothole-ridden roads within the city.Express did a reality check on the condition of the ORR that connects all the major highways to the city. The journey began at 11am. This reporter took a bike ride starting from Nayandahalli junction on ORR towards Nagarbhavi. Just after 2 to 3 km the ride got bumpy on the bridge which is  part of the ORR. The damaged road here reduces the speed of all vehicles. Then came Sumanahalli. Besides being pothole-ridden, the road here also had mud on either side where wild plants grow - reducing the width of the road. 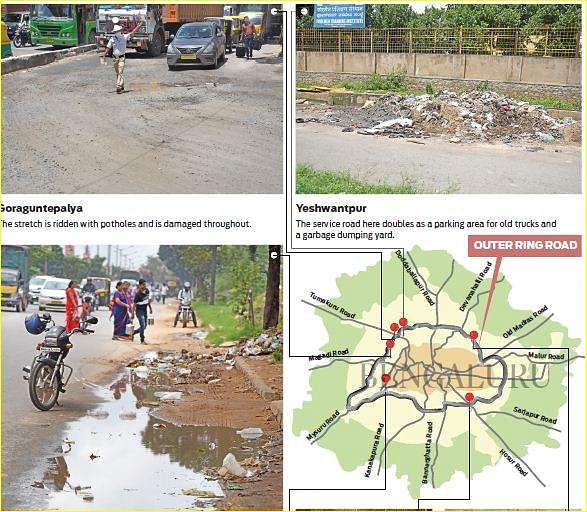 At Yeshwantpur, though the traffic was slow, there was no jam on this 13-km stretch from Nayandahalli to Yeshwantpur. But the chaos started at Goraguntepalya. A traffic police personnel said, “This stretch is hopeless even when it is asphalted. We often request truck drivers carrying crushed stones to give a bagful of it so that we can fill the potholes.” On the road towards Jalahalli, vehicles can barely move at more than 10km per hour. At Jalahalli, the road opens up yet again but the air is thick with dust.

At Kasturinagar the road is damaged due to continuous flow of sewage water. Shivashankar, who runs a grocery shop nearby, said, “We have complained to the BWSSB but in vain. Ever since it started raining, this stretch is like a roadway to hell.”A few kilometres down is Mahadevapura, from where the IT corridor starts. The road outside the telecom dealer Ericsson is severely damaged with potholes and the stretch leading to Bagmane Tech Park is no better. Anish Nataraj, a techie who works at a firm in the park, said, “The road is in terrible shape thanks to the Metro construction. Even the service road is a painful ride and the traffic is forever moving at a snail’s pace.”

Some 6km further, there is Agara junction flyover and at the end of this motorists are welcomed by a pothole. “People drive fast on the flyover. But this pothole poses a threat to their lives and limbs,” said Mahesh Chandra, a resident of HSR Layout. The bus stop here too has a pothole right in front of it. “How can people climb into the bus in a spot like this? So we park our bus either before or after the stop,” said Nagappa, a bus driver. 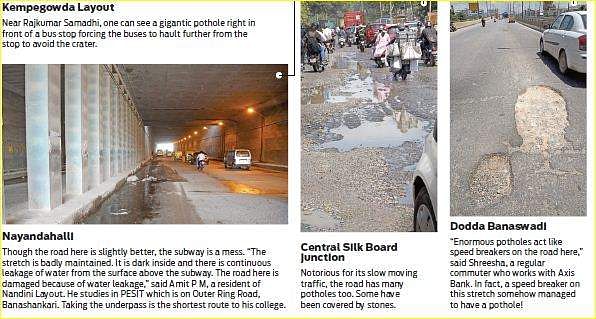 Then came Silk Board junction - one of the biggest traffic bottlenecks in the city apart from Marathahalli Railway Over Bridge, Kundalahalli and Tin Factory Junction. The stretch here too is dotted with potholes.
At Kumaraswamy Layout junction, the road on either side is dumped with garbage, besides being ridden by potholes.

On the way towards Kathriguppe via Devegowda petrol bunk, a huge pothole had turned green. “This is the result of garbage water that collects in this pit from garbage trucks, every day. The smell is unbearable,’’ said Babu, owner of an automobile repair shop. Despite many complaints by the locals to the civic agencies, the pothole is still not filled. After the gruelling four-and-a-half-hour journey, it was clear that the ring road which was built to ease traffic in the city ironically has some of the worst traffic bottlenecks.