The issue has surfaced amidst debate over high expenditure incurred for the accommodation of VIPs who had arrived in the city for the event.

BENGALURU: It cost Rs 1,450 per plate at the high tea served at Vidhana Soudha Banquet Hall during the swearing-in of CM HD Kumaraswamy and DyCM G Parameshwara.  And the total bill for 300 guests was Rs 4.35 lakh, according to an RTI reply. Apart from tea and coffee, a few snacks are provided at high tea during government events. 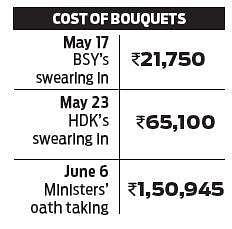 Considering the expenses incurred and smelling a scam, RTI activist Narasimha Murthy has decided to approach Anti-Corruption Bureau or Lokayukta over the issue. The details of expenses were provided following an RTI application by Murthy.

The issue has surfaced amidst debate over high expenditure incurred for the accommodation of VIPs who had arrived in the city for the event.

Narasimha Murthy accused the state government of hiding the actual expenses incurred by it. “I had sought item-wise data on the cost of arrangements made during the three swearing-in ceremonies.However, authorities at the Guest House have not provided it,” he said.

Hence, he will petition the State Information Commission urging it to ensure that the data sought under RTI be provided to him. “The manner in which the data was provided has raised more questions. The State guest house has revealed information only on expenditure for accommodation and stay of guests, while withholding details of other expenses,” he added.