Experts, while maintaining that ISRO has the capabilities to meet the deadline, feel that the three-and-a-half-year countdown to achieve it is too tight for such an exercise.

BENGALURU: Prime Minister Narendra Modi, from the ramparts of the Red Fort in New Delhi on Wednesday, set a deadline of 2022 for India’s first manned space mission and join the elite space-faring club of Russia, the USA and China. But it comes with steep challenges for the country’s space scientists to meet.

Knowing well the hard challenges ahead, Sivan told reporters on Wednesday following the PM’s announcement — who termed the mission ‘Gaganyaan’ — that the space agency will first conduct an unmanned dummy mission into space, mimicking all human spaceflight parameters within two years and only then go for the country’s first human space flight.

Experts, while maintaining that ISRO has the capabilities to meet the deadline, feel that the three-and-a-half-year countdown to achieve it is too tight for such an exercise. The main issue: acquiring technologies for the project, as ISRO is yet to safely develop and test a range of them for the mission.

Gaganyaan: Capsule yet to be developed fully

SPACE scientists pointed out that one of the most crucial technologies required for the success of Gaganyaan — the capsule in which the Indian astronauts, called Vyomanauts, will travel in space — is yet to be developed fully.

R Aravamudan, former director of U R Rao Satellite Centre, ISRO, told The New Indian Express that although the deadline set for completion of such a specialised project was a tough one, ISRO has done some projects with similar deadlines in the past, but this one will be challenging. “So far, the project was not fully approved. But now, since the Prime Minister has cleared it, the project can go ahead full steam,” he said.

Another source at URSC said the exercise to begin funding itself will take around six months, leaving the space agency about two-and-a-half years to complete the project. In December 2015, the project was estimated to cost a whopping Rs 12,400 crore, a budget for which was not found in the 12th Five-Year Plan (2012-2017) nor in the 13th Five-Year Plan (2017-2022).

ISRO sources have tipped the budget now to be “much lesser than that”, which sources point out will cast doubts on the quality and safety of the mission and the astronauts to travel on it. Space experts said there is scepticism surrounding completion of the ‘tech-intensive’ project within three-and-a-half years as most of the work under the scheme has to start from scratch.

Some questions raised are: Does ISRO have fully functional space suits for astronauts? Do they have the necessary technologies to block high-speed projectiles which are part of space debris? Have astronauts been selected for the mission? What will be the astronaut selection process, which is supposed to be long-drawn, including the training to follow?

“Since the project was not among the priorities of ISRO till now, only a few technologies required for a successful manned space mission are available. Then, there is the dispute between ISRO and Ministry of Defence over who should be sent to space.

As ISRO has found itself in the centre of one such project now, they should be ready with many crucial components before they can send a man to space and bring him back safely,” a source in ISRO said.
There are major technologies that ISRO needs for such a venture. But with the backing of the government and the required funds, all these technologies can be developed or acquired. But ISRO will have to make use of all facilities available, both nationally and internationally, Aravamudan said.
Sivan, however, has said ISRO will offload the process of satellite and launcher production to private industry while dedicating their efforts towards the completion of the Gaganyaan project. 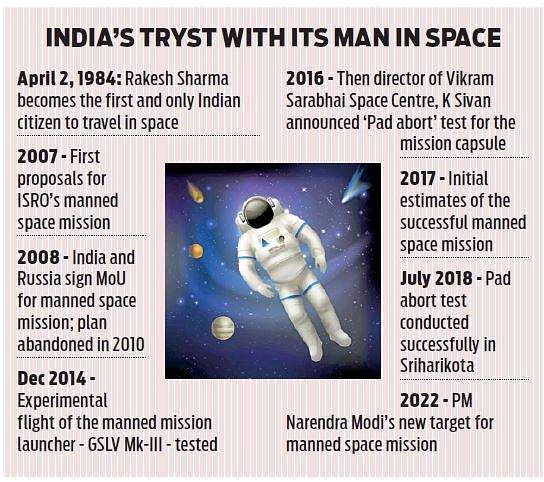 Now we are on Telegram too. Follow us for updates
TAGS
Independence Day Narendra Modi ISRO