MADIKERI: Search and rescue operations in landslide and rain-ravaged Kodagu were called off on Tuesday. Ever since the floods hit the region a week ago, 1,735 people were rescued by nearly 1,100 personnel of Indian Army, Navy, NDRF, SDRF, Civil defence and police teams.

The rescue operations have been called off but some teams will be on standby and are stationed at the district headquarters.

“With the first three priority tasks - rescue, relief and rehabilitation almost over, the next step would be to rebuild Kodagu,” he said.

Garuda Force and Anti-Naxal Sqaud too were involved in the rescue mission.

Now that the rescue operation has concluded, the district administration along with the police team is involved in identifying missing people and the dead.

“Eight drones with 16 operators will reach the district and they have been sent by DGP Neelmani Raju. The drone team will begin operations across the landslide-hit villagers to identify any people stranded,” said Bhasker Rao.

The drones will function across Mukkodlu, Madikeri, Napoklu, Jodupala, Madapura and Sampaje areas. “This is the first time that drones are being used in a natural disaster,” he said.

Three drones reached the district on Tuesday and they will be operated by the Bellary police team.

While many people are going beyond limits to help those in distress, there were a handful of miscreants who were involved in burgling evacuated houses in Kushalnagar.

This act has now been controlled by the district administration and police who have appointed 250 home guards to safeguard the vacated houses.

“Since there is no power across the district, some people are involved in looting houses, especially during night. We have sent home guards who are guarding the areas,” Bhaskar Rao said.

‘Do not contribute to pvt firms’

ADGP Rao also requested donors not to contribute to private firms and instead make all the contributions to CM’s official relief fund.

“There are many private agencies that are involved in money-making business during the time of distress. To make sure that relief items reach the beneficiaries without any misuse, we have installed check posts and all products are being shipped to DC’s office. The distribution from here is done systematically with the help of village panchayat officials,” he said. 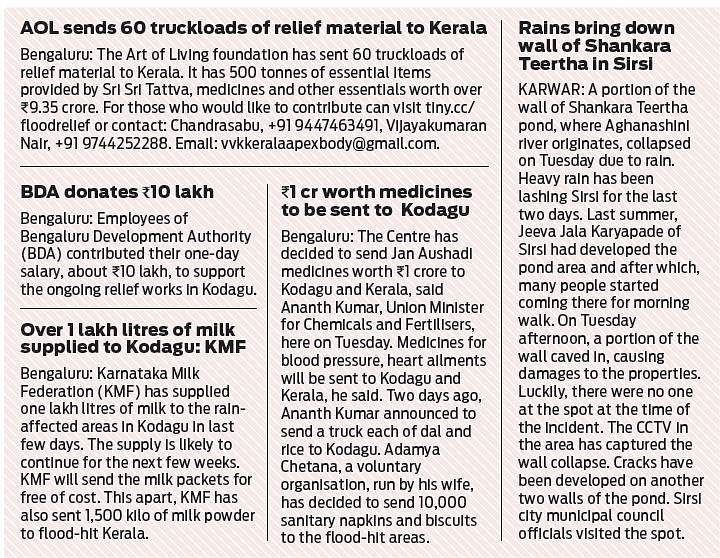 Now we are on Telegram too. Follow us for updates
TAGS
Karnataka Rains Kodagu Floods