A KSRTC bus has been modified into an ICU ambulance to shift large numbers of victims of emergency in Kerala at one go. The ‘Golden Hour Rescue Wagon’ has been sent from Bengaluru to Ernakulam. Prepar

BENGALURU:A KSRTC bus has been modified into an ICU ambulance to shift large numbers of victims of emergency in Kerala at one go. The ‘Golden Hour Rescue Wagon’ has been sent from Bengaluru to Ernakulam. Prepared with the help of Brains Hospital here, it is equipped with eight beds, oxygen cylinders, warmer, multipara monitor, suction line, IV fluids, splint, wound dressing materials and all emergency medicines. 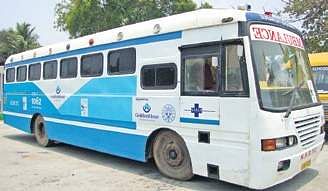 A team of trained paramedics are actively participating in the medical treatment, rescue and evacuation process. Since Tuesday morning, the Golden Hour team members have been working in association with the rapid action team from the District Hospital, Ernakulam in providing emergency medical help to the affected people at the rescue camps around Ernakulam. The team visited two of the rescue camps at North Paravur taluk, Ernakulam district in Kerala on Tuesday. Over 500 affected people have taken shelter in these two camps. At these camps, the team provided TT immunization to over 100 people. On Wednesday, the team visited two other health camps at Gothuruth and Chittattukara in Ernakulam providing prophylactic medicines and also counselling.

“After any such natural calamity, there are chances of water-borne and vector-borne diseases spreading. Hence, it is very important to take preventive medications,” said Shashi Kumar HS, Paramedical Instructor, Golden Hour, currently working in Ernakulam.

Dr NK Venkataramana, founder, Brains Hospital, said, “We have built a unique wagon in association with the KSRTC where a bus has been converted into an ICU ambulance, which can shift large number of victims of emergency together. The objective is to be ready for any day-to-day emergency or mass casualty.”