Catching ghosts under the sea

MANGALURU: In the dim light that penetrates seawater, a dull looking net floats aimlessly ensnaring occasional fish that comes in contact. The fish caught in the net dies attracting predators and scavengers who meet the same fate. The net continues its deadly journey in the deep blue sea continuing its vicious circle. And the net is called ‘a ghost net’.

In June, the Ministry of Environment, Forest and Climate Change along with the state government agencies took out a ‘swachh sea’ exercise on the occasion of World Environment Day. At the end of 12 days of this cleaning exercise along the Dakshina Kannada coast, the volunteers collected around 35 tonnes of trash in which 10 to 15 % was discarded nets, roughly 3 to 5 tonnes. “Some were too huge requiring a group of volunteers to drag them away,” said Dinesh Kumar, Regional Director of Environment Department. 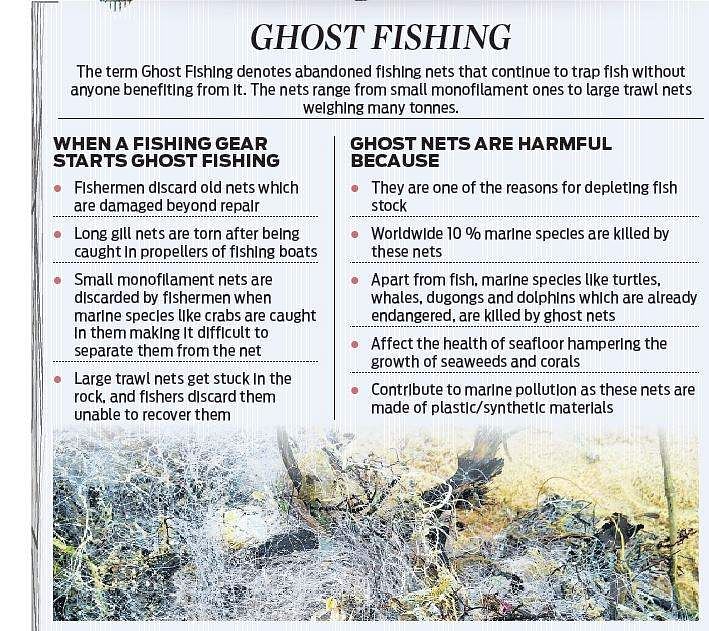 On July 13, the fisheries department, Dakshina Kannada district, conducted a meeting with fishermen sensitising them on various topics and one important topic was not discarding fishing nets in the sea. As a next step, the department has mandated that all fishing vessels should have a dumping bin and bring the trash back to the shore.

“We have received orders mandating fishing boats to have a dustbin aboard. The order will be executed in a phased manner from this fishing season,” says Mahesh Kumar, Deputy Director of Fisheries, Dakshina Kannada.

Across the world, ghost net or ghost fishing is a serious threat to fish stock. It has been estimated that at least 10 per cent of fishes across world oceans are wasted due to these nets floating in the seas. Apart from the floating nets, there are also tonnes of nets piled up in the seabed, killing bottom dwellers.

Prof.  Dr B Hanumanthappa, Department of Fisheries Engineering and Technology, Fisheries College, Mangaluru, says gill nets floating in the sea are more harmful than others. These gill nets will have buoys on top and weight at the bottom to act as a panel and if they are abandoned at sea with buoys and weight, they will be floating endlessly killing whatever marine life caught in them. It includes marine animals like turtles, dolphins, sharks, and squids apart from loads of fishes.

Among the marine litter discarded by fishermen while fishing in the middle of the sea, nets are most hazardous, says Prathibha Rohit, Head of Mangaluru Centre of Central Marine Fisheries Research Institute. While the gill nets floating with buoys keep killing fish till their ability to float, the massive trawl nets sinking to the bottom of the sea cause their own damage. For instance, the trawl net on a coral reef would kill the reef itself causing coral bleaching.

“It is a serious problem across the coast. During our interactive sessions, we have been sensitising fishermen, appealing to them to bring back the damaged nets,” she said.

Another major harm is that ghost nets are mostly made of plastic materials like nylon and they severely pollute the sea as they disintegrate. These disintegrating nets cause micro plastic pollution of the sea water which then gets absorbed into fish’s gut.

Some of the other remedial measures include sensitising scuba divers to pick whenever they come across a ghost net from the seafloor during their expeditions. Attaching radio beacons in gill nets is another method to recover the lost nets in the sea, according to experts. (arockiaraj.j@newindianexpress.com)