The ‘invisible’ culprit has been eluding both the airport and the railway security.

BENGALURU: Four bomb hoax calls in one week. The ‘invisible’ culprit has been eluding both the airport and the railway security. For the third time in a week since last Monday, the man who has apparently made bomb-hoax calls his pet hobby, sent the security at the Kempegowda International Airport into a tizzy this Monday too. And he added Krantiveera Sangolli Rayanna (KSR) city railway station to his target list.

Police firmly believe that the man — who is known to be fluent in English and Hindi — is one and the same who made hoax bomb calls to KIA on August 20 and 22, and then backing that up with calls to the KIA for the third time and the KSR city railway station on Monday. He is said to be specifically using only two mobile numbers to make the hoax calls.

The call on Monday came from the same mobile number from which the hoax call was made on August 22 to the Nodal Manager at BIAL to inform that a bomb was placed in the luggage of AirAsia India flights heading to either Kolkata or Thiruvananthapuram.

A senior police officer probing the case said the caller was repeatedly changing his location within minutes of making the calls. He was using two SIM cards and his location was found around Banasawadi in East Bengaluru on Monday afternoon. “We suspect he might have taken SIM cards in someone else’s name and is using them,” he said.

Incidentally, just after the August 20 bomb hoax call to KIA, the police had identified the caller to be a 35-year-old native of Udupi, presently based in Bengaluru. They also learnt that he was already wanted in a case relating to a theft of a laptop in an insurance company he worked in here.However, tracking him down has remained a challenge, although a special team has been formed to nab him, and the police are exuding confidence of arresting him.

In the afternoon, hoax calls were received on the mobile numbers of an AirAsia staffer as well as the Terminal Manager of BIAL around 1 pm. “While the BIAL manager was told a bomb was placed in a metal container in a flight operated by Air India, AirAsia India or Jet Airways, the AirAsia India staffer was specifically informed that a bomb was placed on its flights that were to leave for Pune, Hyderabad or Kochi,” said a senior Central Industrial Security Force (CISF) official.

According to a spokesperson from AirAsia India, “AirAsia India received a hoax message involving two flights. The caller reported that a bomb was placed on board our flights i5 1426 from Bengaluru to Pune and i5 1516 from Bengaluru to Hyderabad. All precautionary measures and checks were initiated and the call was established to be a hoax.” As a consequence, the Pune flight was delayed by two hours while the Hyderabad flight was delayed by 45 minutes.

The police along with a bomb disposal squad rushed to the spot and after a thorough check-up  came to the conclusion that it was a hoax call. The hoax call for the KSR city railway station was made to the Government Railway Police (GRP) control room at precisely 1.23 pm — just minutes after the call made to the KIA. “The caller, speaking in Hindi, just said a bomb is there in a piece of luggage in the cloak room and cut the call.”

The bomb disposal squad, including sniffer dogs, were pressed into action at the cloak room, located in the concourse area of the station.A major search was jointly conducted by both the GRP and the Railway Protection Force (RPF). A senior RPF official said, “We conducted the search until 3.15 pm. It proved to be a hoax call.”However, there were no delays in arrivals or departures of trains due to the hoax calls. 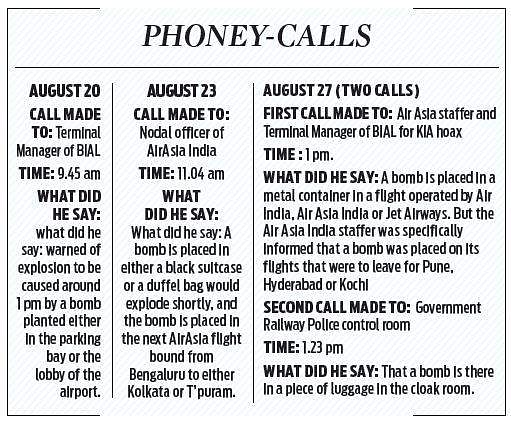 Now we are on Telegram too. Follow us for updates
TAGS
Bomb hoax Krantiveera Sangolli Rayanna KSR city railway station