Karnataka: Stories that mattered in 2018

Through the year, The New Indian Express has published stories that have touched a chord with the public and stirred the powers that be to act.

Through the year, The New Indian Express has published stories that have touched a chord with the public and stirred the powers that be to act. At the end of an eventful 2018, we recapture some inspiring reports that acted as catalysts, ushered in change and impacted lives across Karnataka.

From toilet to a roof over  their heads

D1 is all that Lakshminarasamma and Obalappa — residents of Kadapalakere village in Pavagada taluk — received to construct a house by the gram panchayat. The two landless farmhands were forced to live in their neighbor’s toilet for a year, anticipating grants under Ambedkar Awas Yojana. Officials blamed a “technical glitch” for the D1 grant joke played on the elderly couple. TNIE had reported their plight on November 3. A day later, a team of taluk-level officials,  visited them and promised to help them get funds.

The TNIE had published two stories titled ‘Land swap between defence, govt in sensitive zone’ and ‘Bannerghatta faces threat of being swallowed by urban jungle’, on September 8. Lokayukta Justice Shetty initiated suo motu proceedings and started investigations into the issue, and directed authorities to take appropriate steps to prevent this from happening.

On July 20, 2018, TNIE published three stories — ‘Bengaluru may reap toxic veggies, for froth it sows’, ‘We don’t want another Bellandur’ and ‘Sheep are falling sick’ — on the impact of polluted water supplied to lakes in Chikkaballapur and Kolar districts from the KC Valley project. Based on these reports, Lokayukta Justice P Vishwanatha Shetty issued notices to the Secretary, Minor Irrigation Department, the Chairman, Bengaluru Water Supply and Sewerage Board, Chief Executive Officer, Lake Conservation and Development Authority, and commissioners of BBMP and BDA. The Lokayukta asked the respondents to submit their responses within four weeks, and take measures to remedy the situation.

Kere Kamegowda, man on a mission

On July 15, 2018, TNIE reported how an 82-year-old shepherd had singlehandedly developed 14 ponds in Daasanadoddi village in Malavalli taluk of Mandya district. Over a span of four decades, Kamegowda had turned an entire hillside in his village green. Witness to the barren land, scorching heat and sufferings of birds and animals alike, Kamegowda — often referred to as a ‘madman’ — dug ponds for two hours every day for 40 years. Recognising his service after it was reported in TNIE, the Karnataka government conferred on him the Rajyotsava Prashasti, the highest state award. Kamegowda declared that he would use the award to dig more ponds.

At 91, forever student gets Rajyotsava

Learning never stopped for nonagenarian Shranabasavaraj Hadli, a retired government school teacher who wrote the entrance exam for a PhD course at Kannada University, Hampi. TNIE carried his inspiring story on September 6. Hadli, 91, from Bisaralli village in Koppal taluk, was selected for the Rajyotsava award this year. Hadli, who has authored 15 books and penned a few songs, applied for a PhD in ‘Vachana Sahitya’ at the university. Of his four sons and two daughters, two sons retired recently.

Actor Prakash Rai came to the rescue of people at Bandlarahatti in Hiriyur taluk after TNIE reported about the lack of work happening in the village that he adopted, on January 27. After the publication of the report, titled ‘10 months after adopting Hiriyur village, Prakash Rai yet to show up’ on October 11, Prakash ensured that a water purification unit is installed at a cost of D3 lakh. The new plant started functioning in the village, and villagers are happily drawing water from this facility now.

Martyrs’ kin get their due

Lokayukta Justice P Vishwanatha Shetty asked officials concerned to take action after TNIE wrote about families of 13 martyrs awaiting benefits after the soldiers died on duty. The story, ‘Families of martyrs from Karnataka wait endlessly for compensation,’ published on July 19, narrated the plight of the martyrs’ kin as the files were held up at the offices of the concerned Deputy Commissioners and Urban Development Authorities. Justice Shetty asked the government to dispose off the families’ applications within 8 weeks. He also asked the Revenue department to submit the status report after securing the report from the deputy commissioners concerned and registered a suo motu complaint.

Union Transport Minister Nitin Gadkari asked the National Highways Authority of India for a new Detailed Project Report after TNIE published a report about citizens’ seeking a relook at the proposal to upgrade National Highway 766C. The February 15 report, ‘Citizens suggest shortcut during highway upgrade,’ featured people of Hosanagar and members of Kollur Mookambika temple suggesting a method to cut 19 km from the proposed highway by diverting the existing stretch between Hosanagar and Adogodi via Nagara and Sampekatte through Sutta and Bekkodi.

On May 23, TNIE wrote about the struggle of an Army jawan to get justice for his 20-year-old sister who was raped for one-and-a-half years by a rowdy. The jawan, hailing from Muddibehal, was posted in Assam, and discovered the alleged crime when he came home in 2017. He thrashed the accused and took him to the police, who refused to register a complaint. Taking notice of the TNIE report, titled ‘Karnataka: Army jawan struggles to get justice for his sister who was raped,’ the Indian Army wrote to the district police and administration, asking them to take action. Based on the letter, police registered a complaint and the case is in court. 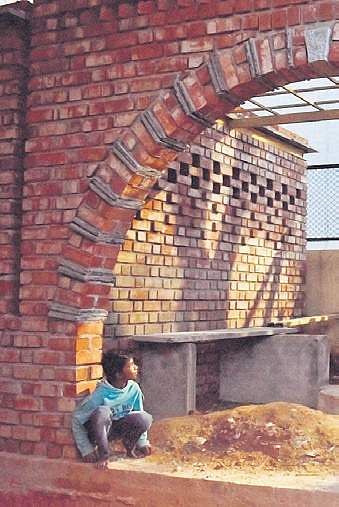 No to amphitheatre, yes to college playground

A decision was taken to demolish an open-air theatre built by actress Bhavana Ramanna on a playground belonging to Government Arts College in Bengaluru after TNIE reported about it. The government is also mulling recovering the expenditure needed for the demolition work from the previous principal of the college who had allowed the work to begin. The Higher Education Minister was prompted to order an inquiry into the project following the TNIE report, ‘Private open air theatre at government college sparks row’, published on August 7. TNIE was the first to report a decision by the State government to allow the construction, which, the actress said, aimed to provide space for artistes to perform in the heart of the city.

After a story on the bad condition of Byramangala lake at Bidadi in Ramanagara district was published in TNIE on August 23, the Minor Irrigation Department ordered preparation of a Detailed Project Report for setting up a sewage treatment plant. The report, ‘Bengaluru feeds its poison to Byramangala lake in Bidadi, gets back its taste,’ highlighted how industrial and city waste was entering the lake through the Vrushabhavati river and polluting nearby villages, leading to health issues. The Karnataka State Pollution Control Board (KSPCB) also started sending officials to inspect industries in and around Bidadi to prevent them from letting untreated water into Byramangala Lake.

After a story on the unscientific road work taken up by the Rural Development and Panchayat Raj (RDPR) Department at Idu gram panchayat in Karkala taluk was published on December 22, RDPR engineers instructed the contractors concerned to dig the trench and make a channel to ensure resumption of water supply to fields. The story, ‘Farms left parched as road project buries water channel,’ highlighted how the 1.44km road, under ‘Namma Grama Namma Rasthe’ scheme, from Idu Palke to Batteni, had buried a traditional water channel that used to irrigate 70 acres of paddy fields. Ajith Kumar Jain, a farmer, told TNIE that farmers are happy now since the refurbishing of the channel began on December 24.

Reuniting a child with her foster mother

For seven years, Jayashree Guttedar had brought up an abandoned girl as her own, only to be told that she was raising the girl “illegally”. The wailing baby that Jayashree had rescued from a bush near a private maternity hospital in Gubbi Colony in Kalaburagi years ago, was taken away by Women and Child Development department officials to an orphanage. Jayashree -- a mother of three who had accepted the girl as her own -- had to run from pillar to post, fighting to claim the child with proper documentation. Jayashree then reached out to district in-charge minister Priyank Kharge. On October 3, 2018, TNIE carried the story, highlighting the torment of the mother. Minister Kharge intervened, and the child was returned to Jayashree with coordination from the district commissioner.

More from Karnataka.
Now we are on Telegram too. Follow us for updates
TAGS
Lakshminarasamma Recap 2018 2018 with TNIE Karnataka Karnataka heart touching stories