After 37 long years, this 77-year-old Belgian national has travelled all the way from his country to witness the 88th Mahamastakabhisheka.

SHRAVANABELAGOLA: After 37 long years, this 77-year-old Belgian national has travelled all the way from his country to witness the 88th Mahamastakabhisheka. For him, India and Shravanabelagola have changed incredibly. Bartolomivis, an avid photographer who considers India to be his second home, has arrived here once again to witness the mega event. 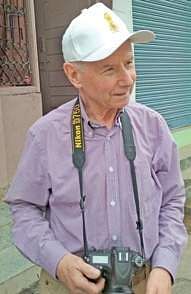 Bartolomivis told Express that he is fortunate to witness the event again. “The last time I came here was in 1981. Then, I was 41 years old. It was also the 1,000th year celebration of the marvellous statue of Gomateshwara. I was fortunate enough to meet the then Prime Minister Indira Gandhi, who had come for inaugural,” he said.

Comparing those days of Shravanabelagola and Mahamastakabhisheka celebrations, Bartolomivis said a lot of has changed, including the cameras which captured a huge number of photos. “In 1981, the streets of Shravanabelagola used to be very narrow and rigid. But today, well asphalted roads welcome you. However, pollution level has increased,” he said.

He says he may have visited India more than 20 times. Recalling his 1981 visit to Shravanabelagola, he said, “I came here to take photographs. People thought I was journalist and issued a press card to me. After 37 years, I am now again visiting this beautiful place to capture the moments. A Jain family has provided me free accommodation.”

He still carries the press card which was issued to him in 1981, which he considers to be a treasured possession.