BENGALURU: Chief Minister Siddaramaiah on Monday asked Goa Chief Minister Manohar Parrikar to write to the Mahadayi Water Disputes Tribunal expressing that state’s willingness to release water to Karnataka if the latter was not keen on having talks with him on the issue.Terming the Goa’s CM letter to BJP state president BS Yeddyurappa as a ‘political stunt’, Siddaramaiah said Parrikar had not responded to his letters seeking a meeting to discuss and resolve the issue. “Since people are questioning the BJP leaders about their failure, the Goa CM wrote a letter to Yeddyurappa to mislead people of the state,’’ Siddaramaiah told reporters at his home office. 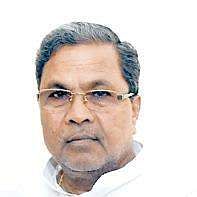 He said Parrikar’s letter to Yeddyurappa cannot be presented before the tribunal, as suggested by BJP leader Jagadish Shettar. “Shettar’s suggestion is ridiculous. Being a former Chief Minister and also a lawyer, he should know that the Chief Minister of Goa should write to his Karnataka counterpart and only that letter can be presented before the tribunal,’’ Siddaramaiah said.

Not many senior BJP leaders are attending Yeddyurappa’s Parivartana yatra and this has exposed groupism within the BJP.

“Yeddyurappa cannot even announce names of their party candidates. That will also be done by Amit Shah. After some names were announced, their own leaders complained to Shah against Yeddyurappa,’’ Siddaramaiah said, adding that Shah’s strategics will not work in Karnataka.

Forum yet to seek CM’s appointment
After the recent outrage over implementation of the Mahadayi project, the movement appears to have lost steam. The five-day protest in front of the BJP office in the city and petitioning many leaders has had little impact towards the realisation of the project.Adding to the delay is the fact that the Karnataka Raitha Sena is yet to seek an appointment with Chief Minister Siddaramaiah.

Viresh Sobradhmath, president of Karnataka Raitha Sena, which spearheaded the campaign, told The New Indian Express that all decisions regarding the future course of the Mahadayi movement will be taken in a meeting scheduled to be held on January 3. “The executive committee of the Sena will decide on the next step. It has been a week since we issued a deadline to the state to fulfil our demands,” he said.

‘Settle row on humanitarian grounds’
Belagavi: Goa BJP MP and Union Minister Sripad Nayak said the Mahadayi river issue should be settled on humanitarian grounds.Nayak, who had visited Belagavi MP Suresh Angadi’s house on Monday morning, said that the matter has not gone to such an extent that it can spoil the harmony between Goa and Karnataka. He said that solving the dispute with mutual discussion is the immediate solution. MP Angadi held the Congress responsible for the dispute as it would have been solved if former AICC president Sonia Gandhi would not have interfered in favour of Goa in 2012.

Dharwad: Calling for intensifying the present Mahadayi movement, social activist Anna Hazare said the farmers are being neglected by governments in the country. “The Mahadayi issue will come to a conclusion if the current movement is intensified. The farmers must unite for the cause and only then they can achieve their goal,” he said, adding that it is not necessary to create enmity between states over any issue.

Now we are on Telegram too. Follow us for updates
TAGS
Mahadayi river water dispute