Twenty years later, Deepak Rao became the latest victim of the divisiveness being perpetrated along religious lines in coastal Karnataka.

BENGALURU: In 1993, in the early days of communal disharmony in the sensitive Dakshina Kannada district after the Babri Masjid demolition, Surathkal was among the first towns where a youth was murdered — probably one of the first victims of the prolonged strife that continues to unravel today.

Twenty years ago, in 1998, a communal riot which broke out in Surathkal on December 29 resulted in the town shutting down for almost eight days, claiming eight lives.

Twenty years later, Deepak Rao became the latest victim of the divisiveness being perpetrated along religious lines in coastal Karnataka. The Bajrang Dal and BJP worker was hacked to death in broad daylight by four persons at Katipalla near Surathkal, on January 3.

While heads continue to literally roll in one of the most literate districts of the state, activists and social workers say the divide has entered schools and colleges, with even schoolchildren ganging up, based on their religious affiliations.

Although opinions on when or what exactly caused such communal disharmony, are divided, experts agree the situation worsened 20-25 years ago. 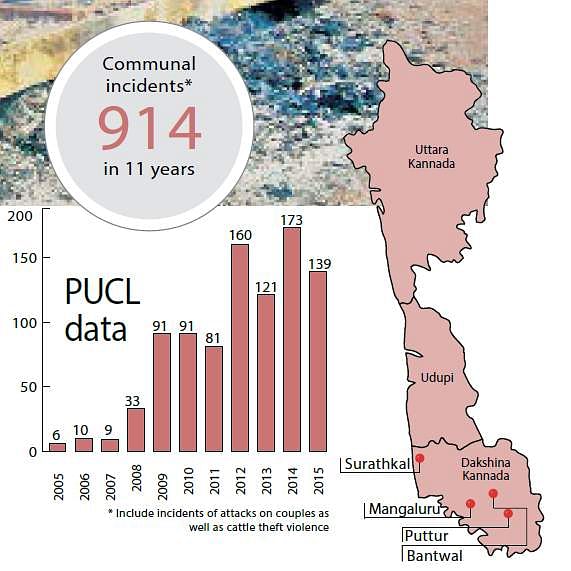 According to Suresh Bhat Baakrabailu, a social activist in the coastal districts, the tipping point was the Babri Masjid demolition on December 6, 1992, after which things have been going downhill. “From 1993, the frequency of communal incidents increased and has remained the same in the region ever since. However, such heinous crimes are provided importance only during periods when elections are due,” Baakrabailu said.

Blaming the polarisation on Sangh Parivar and worsening of the situation on ‘reactionary and retaliatory’ organisations like the Popular Front of India (PFI), he said the youth from low-income communities below the age of 30 were the victims.

Eminent writer Sara Aboobaker said while Hindu right-wing groups such as Rashtriya Swayamsevak Sangh (RSS) and Bajrang Dal mislead Hindu youth in the region, PFI and Social Democratic Party of India (SDPI) do the same with the Muslim youth.

“A few years ago, we thought that such issues are occurring due to a lack of literacy. Now, though literacy has improved the condition has not. What is shocking to see now is the fact that Muslim and Hindu kids don’t hang out in schools even. Some teachers have also compromised their ideologies and are affecting their students,” she said.