52% of medicines supplied without quality check: Comptroller and Auditor General

The CAG report for 2014-15 to 2016-17 highlighted that the poor quality assurance by the society resulted in distribution of NSQ drugs to various health institutes in the state.

BENGALURU: According to a Comptroller and Auditor General (CAG) of India report, 50 per cent of the tablets supplied by Karnataka State Drugs Logistics and Warehousing Society to hospitals and warehouses are not tested for quality. The report also questions the veracity of the tests, as some batches of drugs declared as standard quality by the society were found to be of not of standard quality (NSQ).

The CAG report for 2014-15 to 2016-17 highlighted that the poor quality assurance by the society resulted in distribution of NSQ drugs to various health institutes in the state. It noted that the society, which procures and supplies drugs to warehouses and hospitals, not only had a shortfall in testing the drugs but also exercised an inordinate delay in communicating information on NSQ drugs to warehouses and hospitals. 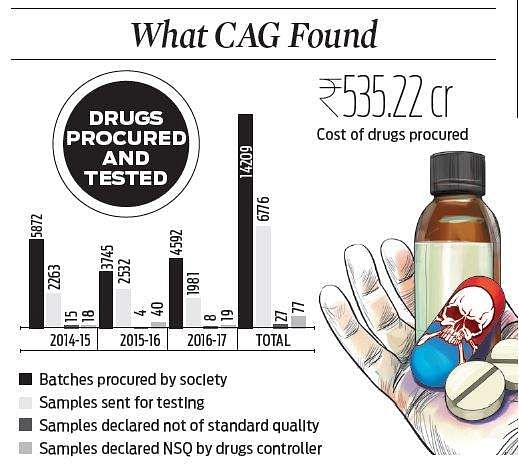 Randomised testing of the drug batches was implemented to ensure the quality of drugs procured by the society. Testing has to be taken up during procurement or at routine intervals in the shelf life of the drug prior to distribution. The society had empanelled four laboratories — three in Delhi and one in Hyderabad — to conduct the required number of quality assurance tests. Yet, only 48 per cent of the samples(6,776 of the 14,209 batches) were tested.

“Thus, 7,433 batches of drugs were supplied to patients without testing or quality assurance,” the report stated. Of the 6,776 batches tested, 27 worth `1.23 crore were declared as NSQ.

To compound the shortfalls of the society, it also exercised inordinate delays in communicating with hospitals and warehouses regarding NSQ. Of the 50 cases in the CAG report, 17 cases of NSQs were reported 16-30 days after the test, while 13 were reported after a 8-15 day delay. Also, of the 104 batches declared NSQ by the society and State Drugs Controller, only 12 were replaced.

“Due to poor recovery mechanism, the society failed to recover `4.86 crore being the cost of these NSQ drugs,” the report added.