BENGALURU:Taking serious note of the fact that nearly 29,000 cases of illegal stone quarrying and sand mining were detected across the state by the Mines and Geology Department in the last three years, Karnataka Lokayukta Justice P Vishwanatha Shetty has said that more stringent and effective steps need to be taken to protect the rich natural resources and prevent environmental imbalance. A total of Rs 110 crore fine was collected for violation of norms in these cases.

The Lokayukta’s directions come in the wake of the details submitted by the director for Mines and Geology in response to the complaints over illegal stone quarrying and sand mining. The data revealed that the department had collected Rs 64.78 crore in fines by detecting 8,224 cases of illegal stone quarrying and transportation between 2015-16 and 2017-18. Similarly, the department had collected Rs 44.97 crore by detecting 20,588 cases of illegal extraction of sand in the same period. Criminal proceedings were initiated in all these cases.

In the recent order, Justice Shetty said, “...no doubt that the steps are being taken to prevent illegal mining of granite, exploitation of sand and transportation of the same. However, looking at the gravity of the situation and complaints made by the public about illegal quarrying of granite and removal of sand,  it is necessary that more stringent and effective steps are taken by all concerned. Illegal stone quarrying and sand mining cause serious loss to the state and inconvenience to the members of the public. They also create environmental imbalance in the state”.

“I am sure the committees headed by deputy commissioners in all the districts will take effective steps. The committees shall also check the excess transportation of sand or stones in vehicles, as the same will cause serious adverse effects on the stability of the roads,” the Lokayukta added. In his report dated June 13, 2018, the director of Mines and Geology N S Prasanna Kumar had informed Lokayukta that in the last three months revenue collection had gone up to around `1 crore per month.

During 2015-16, out of total 61 cases in state, a maximum of 21 cases of illegal ornamental stone quarrying were found in Chamarajanagar district followed by 10 cases each in Kolar and Chikkaballapur. In 2017-18, 11 cases were found in Koppal, five cases in Chikkaballapura and four cases in Bengaluru Rural district. The director of Mines and Geology placed a joint survey map in respect of Survey. No. 272 of Sadahalli village, Devanahalli taluk. The map depicts illegal extraction of stones and murram (red soil). Steps have been taken to prevent unauthorised extraction of building stone and murram. He submitted that a comprehensive mining plan for all the 35 quarries relating to ornamental stones is ready. 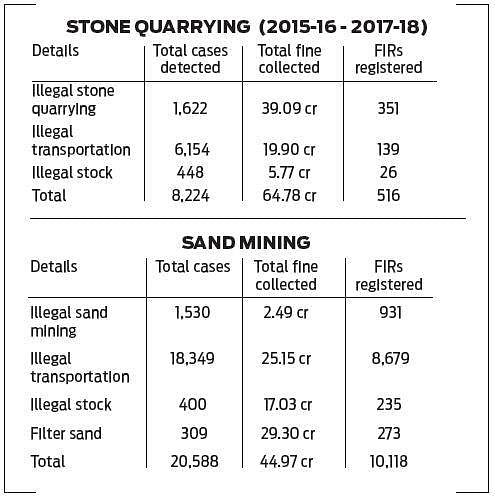