Glimmer of hope for Karnataka farmers

For the past three consecutive years, more than 1,100 farmers have been committing suicide every year in the state, resulting in one of the worst agrarian crisis in recent memory.

BENGALURU: For the past three consecutive years, more than 1,100 farmers have been committing suicide every year in the state, resulting in one of the worst agrarian crisis in recent memory. But if data from the past three and half months is any indication, measures targeting the welfare of farmers appear to have the desired effect. The number of suicides, which had surged in the past three years, has slowed down, courtesy temporary relief of farm loan waiver and good South-West monsoon.

Till July 21, 15 farmers have committed suicide in the state compared to a monthly average of 124, 99 and 97 in 2015-16, 16-17 and 17-18 respectively. Against a monthly average of 106 suicides per month in the past three years, the ‘situation of hope’ for farmers has reduced the number by more than half at around 40 per month. Some experts, however, are skeptical about the numbers, saying that the farmer suicides could spiral out of control again if nothing is done to ensure adequate price for the crops grown by them.

Between April 1 and July 21, a total of 161 farmer suicides were reported, of which 53 was in the month of May — when Karnataka went to polls  — and 49 in the month of June. However, soon after the month when the loan waiver was announced, which coincided with good rainfall in certain parts of Karnataka, the number of suicides has statistically reduced by more than half.

For instance, while the average number of suicides was around 49 per month, in July - the month when loan waiver was announced, it was just 22.However, situation is far from satisfactory. Viresh Sobaradhmath, president of Rait Sena, Karnataka, said that farmer suicides have continued. “Though there is relief from co-operative banks, farmers have not escaped the harassment of  private, nationalised banks and money lenders,” he added.

‘Ensure remunerative price for the crops’
Kodihalli Chandrashekar, president of Karnataka Rajya Raitha Sangha said that while waiver has provided some relief, all calculations of the state in controlling farmer suicides would turn topsy turvy if it does not ensure remunerative price for the crops. “Though number of suicides in June and July is less as compared to previous years, how the coming months will impact farmers is anybody’s guess. If farmers don’t get proper price for their crops in a year when higher yield is expected, suicide numbers might swell again,” he added. 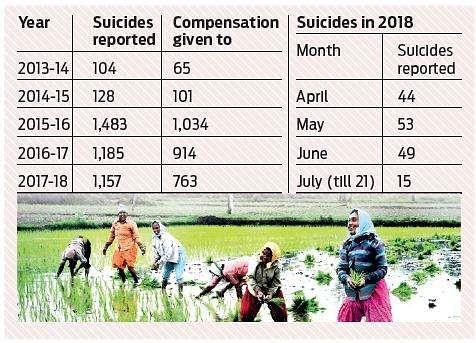 Stay up to date on all the latest Karnataka news with The New Indian Express App. Download now
TAGS
farmers Loan Waiver Karnataka