The donor, 44-year old Puttegowda of Bannur in T Narasipura, was admitted on July 27 after a fall at a construction site and was declared brain dead.

BENGALURU/MYSURU: The state’s traffic police on Sunday managed to pull off another green corridor between Mysuru and Bengaluru in less than a month and this time took 2 hours and 5 minutes to traverse 170 km between the JSS Hospital in Mysuru and the MS Ramaiah Hospital in the city. The donor, 44-year old Puttegowda of Bannur in T Narasipura, was admitted on July 27 after a fall at a construction site and was declared brain dead.

His organs, including his heart, liver, kidneys and corneas were donated by his family after doctors approached them with a plea for organ donation. Puttegowda, the sole breadwinner for the family, is survived by two teenage daughters and his wife. One daughter is a first-year PU student while the other is in Class 9. The heart reached a recipient at the MS Ramaiah Hospital while the liver was sent to Sparsh Super Speciality Hospital in Yeshvantpur. One kidney was sent to Victoria Hospital in the city.

After the consent of the family members, doctors approached the city traffic police officials with the green corridor request. After a meeting with the officials, the heart, liver, eyes and kidneys of Puttegowda were harvested by 6.27 am and taken to Bengaluru for the organ transplant. According to the officials at JSS hospital, a total of six people will receive the organs from Puttegowda.

Unlike the organ transplant of Namana, where only heart valves were transported early this month, here the authorities had a tough time since they had to move a live heart that cannot be kept outside a human body for long. The motorcade, which left Mysuru at 6.55 am, reached the city at 9 am. En-route, there was continuous coordination between traffic police at Mysuru, Mandya, Ramanagara and Bengaluru to ensure that there were no delays. “Both the Mysuru and Bengaluru police created the corridor effectively and helped the organs reach within 2 hours. The heart was transplanted to a 20-year-old male patient who has been suffering from restrictive cardiomyopathy for the last 8 years,” said Dr Nagamalesh UM from the MS Ramaiah Narayana Heart Centre.

According to a senior police officer, the convoy maintained a speed of 120 kmph through the ride to cover the distance in such a short while. “In conditions of zero traffic, as was the case on Sunday, speeds can go up to 140 kmph. A bubble extending up to a few kilometers was maintained with traffic being stopped at various junctions,” the police officer said. Explaining the planning that goes behind such an achievement, the officer said that it was critical that the route be mapped down to the last detail. “This helps us avoid any delays in transporting the organs,” he said. 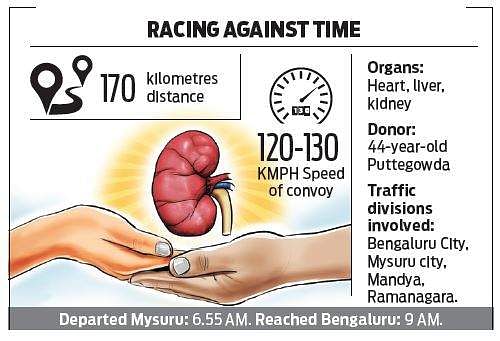