A complete farm loan waiver without any conditions and within 24 hours was the promiseH D Kumaraswamy made through his party’s manifesto ahead of the assembly election.

BENGALURU: A complete farm loan waiver without any conditions and within 24 hours was the promise D Kumaraswamy made through his party’s manifesto ahead of the assembly election. Now, sitting in the Chief Minister’s chair, Kumaraswamy must have realised that the deal was easier said than done.

The Congress-JD(S) coalition government in Karnataka is in the process of “working out modalities” for a waiver that aims to make farmers in the state “debt-free.” As many as 3,515 farmers committed suicide between April 2013 and November 2017 in Karnataka, and the number paints a clear picture of the distress brewing in the state’s farming sector.

While immediate relief to farmers is a priority, the question whether the Congress-JD(S) combine is risking Karnataka’s economic health is looming large.
Karnataka’s budget was pegged at Rs 2,09,181 crore for 2018-19, of which about Rs 1,62,637.44 crore is available for revenue expenditure (Rs 35,458 crore is set aside for capital expenditure and Rs 11,086 crore for debt repayment). The estimated Rs 53,000 crore required to waive farm loans essentially makes up nearly one-fourth of the budget size.

While the JD(S) election promise was to write off all agriculuture-related loans, including crop loans, farm development loans, equipment and farming vehicle loans, horticulture loans, irrigation loans etc, the Chief Minister has proposed to waive only crop loans in the first phase. The finance department is still working out the math, but whatever the waiver amount is, the government has no other choice than raising money from external sources, economists say.

“Since the waiver wasn’t considered in the budget for 2018-19, a special provision has to be made. Revenue needs to be generated to bridge the deficit this waiver will create,” said Prof R S Deshpande of Institute for Social and Economic Change (ISEC). Borrowing heavily from the public as well as the Central government seems to be the option available for the government.

Pranay Kotasthane, policy analyst and head of geostrategy programme at the Takshashila Institution, views the waiver differently. While he acknowledges that there could be a crisis, he also sees an opportunity. “The government has the opportunity to use this crisis for structural reforms. The government will have to spread its liabilities over multiple years and, at the same time, mobilise additional sources of revenue to be able to pay off these liabilities,” he said. Cutting down subsidy on power tariff, divestment of non-performing PSUs, improving tax collection are a few suggestions he has for the government. In the 2018-19 budget, the state has already increased excise duties. And, despite pressure from the central government, the state has not cut taxes on petroleum products. Any increase in taxes will be seen as unpopular and a burden on the middle class.

The 2018-19 budget has a total outlay Rs 33,879 crore for agriculture, horticulture, animal husbandry, sericulture department, fisheries, co-operation, water resources and minor irrigation. While the loan waiver is JD(S)’ big promise, its ally Congress’ manifesto promises irrigation projects of Rs 1.25 lakh crore in the next five years. The Rs 53,000 crore loan waiver will force the government to cut down on all other allocations as well as raise revenue in the form of loans. Essentially, it means more loans to waive farm loans.

Out of the Rs 1,62,637 crore revenue expenditure budget available to the state, Rs 28,002 crore is allocated under Scheduled Castes/ Scheduled Tribes sub-plan and cannot be diverted. Also, Rs 10,508 crore is set aside for pay revision of government employees as per the recommendation of the 6th State Pay Commission. This allocation cannot be rolled back either.While economists agree that a complete loan waiver will be a heavy burden on the state’s finances, they also acknowledge that the farming crisis needs to be addressed. 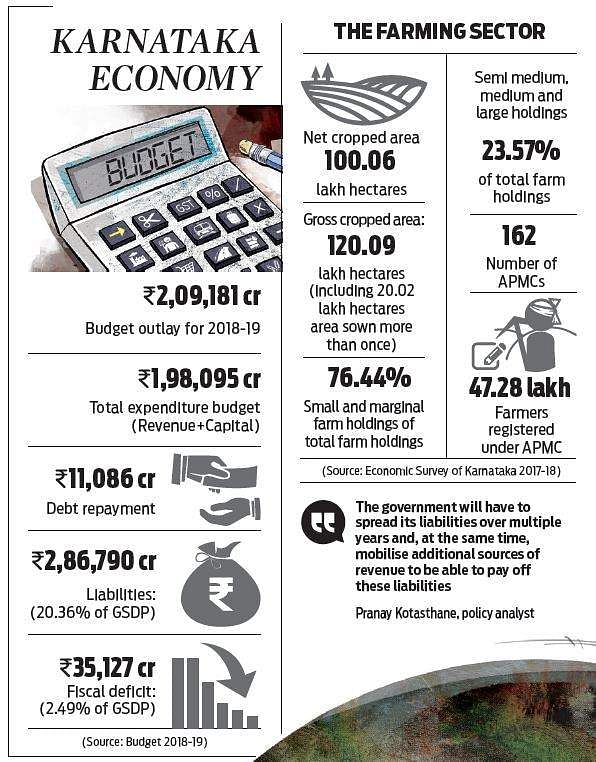 Now we are on Telegram too. Follow us for updates
TAGS
Loan Waiver farm loans