Gauri Lankesh murder case: Was made a scapegoat in others’ conspiracy, says Waghmare to parents

Waghmare’s mother Janaki Bai and father Ashok Waghmare had come from Sindhagi in Vijayapura to the city to meet their son. 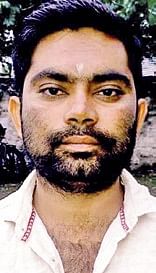 BENGALURU: Parashuram Waghmare, who is the suspected shooter in the journalist-activist Gauri Lankesh murder case, has reportedly told his mother, who met him on Sunday, that he had become a scapegoat in a conspiracy hatched by others.

Waghmare’s mother Janaki Bai and father Ashok Waghmare had come from Sindhagi in Vijayapura to the city to meet their son. Officials of the special investigation team (SIT) probing the case allowed them to meet Parashuram at their office located in CID office premises on Sunday morning. SIT sources said that the meeting between Parashuram and his parents lasted for about 15 minutes.

“His mother was weeping after seeing his son. He told her that he had become a puppet in the hands of others and ended up becoming a scapegoat. His mother advised him to tell everything to the police if he had committed the crime. Parashuram asked his father to take care of his mother and he would come home soon,” an official said.

Janaki Bai said, “I saw him after so many days. He started crying after seeing me. He is innocent and not associated with any organisation. The police are treating him well and I am a bit relieved after seeing him. He is fine and I believe he is not involved in any crime.”

Ashok Waghmare also told reporters that his son is innocent and they were confident that they will get justice. Parashuram, who was arrested from his house, has reportedly confessed before the SIT officials that he is the one who shot Gauri Lankesh dead on September 5, 2017.

The SIT had got Parashuram in their custody for 14 days which ends on Monday. He will be produced before a court on Monday evening and the SIT will not seek an extension of his police custody and remand him in judicial custody.

Now we are on Telegram too. Follow us for updates
TAGS
Hindutva Gauri Lankesh murder case Parashuram Waghmare

Tens of thousands demonstrate in Rome against neo-fascists