Waghmare, who was arrested from his house in Sindhagi in Vijayapura district on June 12, has reportedly confessed before the SIT officials that he is the one who shot dead Gauri Lankesh at her house. 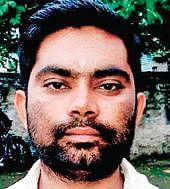 BENGALURU: the Suspected shooter in journalist-activist Gauri Lankesh murder case, Parashuram Waghmare, was remanded in judicial custody by a city court on Monday.

Waghmare, who was arrested from his house in Sindhagi in Vijayapura district on June 12, has reportedly confessed before the SIT officials that he is the one who shot dead Gauri Lankesh at her house on September 5, 2017.

The SIT, who had got him to their custody for 14 days, produced him before the III Additional Chief Metropolitan Magistrate Court on Monday, as his custody ended. SIT officials did not request the court for extension of his police custody, and submitted an application to remand him in judicial custody.

Accordingly, Waghmare was remanded in judicial custody by the magistrate, following which he was taken to Parappana Agrahara Central Prison. He will be in jail till June 27 and the court will hear his case along with that of four accused in the case — Amol Kale alias Bhaisaab, Sujeet Kumar alias Praveen, Amit Degwekar alias Pradeep Mahajan and Manohar Edave alias Manoj — whose judicial custody will end on the same day.

With court sending Waghmare to jail, the total number of accused languishing in jail in connection with the case has gone up to six. Earlier, KT Naveen Kumar, Kale, Sujeet, Degwekar and Edave were arrested and are in the prison.In the remand application submitted to the court by the SIT, it is mentioned that Waghmare would help other accused in the case escape if granted bail. “The person, who rode the bike carrying Waghmare on the day of murder, and two others are yet to be nabbed. Also, the weapon and bikes used in the offence are yet to be seized,” SIT said in the remand plea.

Sources said at least three accused persons involved in the case are still at large and the number of accused would go up once they are arrested. “Waghmare, who completely cooperated with the probe, had revealed that three persons had motivated him to kill Gauri and we had come up with six sketches of the three suspects based on Waghmare’s description as he did not know any details about them.

Once they are caught, more details would emerge on those persons, who actually decided to kill Gauri and passed on the direction to Kale and the others,” an official said.Meanwhile, the Madhya Pradesh police have also questioned Waghmare when he was in SIT custody. “They had come to get details of the case and to know whether the names of progressive thinkers in MP figured in the hit-list of the accused persons,” the official added.

RT-PCR test for all entrants: Uttar Pradesh issues guidelines for all districts on Omicron variant