Amol Kale, who is said to be the mastermind in the case, is the one who gave him Rs 10,000 out of the total amount, in Belagavi after the murder.

BENGALURU: Parashuram Waghmare, the man who allegedly shot journalist-activist Gauri Lankesh dead, got only Rs 13,000 for the hit job.  Amol Kale, who is said to be the mastermind in the case, is the one who gave him Rs 10,000 out of the total amount, in Belagavi after the murder, according to a Special Investigation Team (SIT) official.

Meanwhile, investigations established that out of the three absconding accused, two spoke in Kannada while the other spoke in Hindi. They allegedly incited Waghmare, who until then was not even aware of Gauri, by showing him her speeches on YouTube. 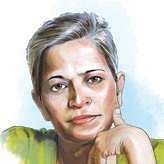 Waghmare is said to have revealed during the interrogation that the three persons, who are absconding, spoke to him at length about Hindu religion and only after realising that he was ready to do anything for the sake of the religion, they brought up the matter of killing Gauri. “Waghmare did not even know who Gauri was. The trio incited him by telling him that she hated Hindus and insulted the religion by making derogatory speeches. They showed him several videos of her speeches in which she had spoken against the Hindu religion. Waghmare felt what she was doing was unforgivable and gave his consent to kill her,” the SIT official said.

After that, the trio had given him Rs 3,000 and asked him to use it for bus fare and food, as he had to travel from his hometown Sindhagi in Vijayapura to Bengaluru, as part of the mission. “He spent Rs 3,000 on the same. Other than that, what he got was Rs 10,000 and that was given to him by Kale,” the official said.

Waghmare had returned home after committing the murder. “A week or 10 days later, he was asked to come to Belagavi, where Kale paid him Rs 10,000. Though he was in need of money, Waghmare refused to take it saying he did it for the sake of religion and not money. However, Kale asked him to take it telling him he would need it,” the official said, adding that those who had promised Waghmare of any help, never got in touch with him after that.

Now we are on Telegram too. Follow us for updates
TAGS
Gauri Lankesh Parashuram Waghmare