At least eight senior Congress leaders, including CM, are trying to get tickets for their kids for the Assembly polls

BENGALURU: The big rush for Congress tickets in the state to contest the Assembly election has put even the senior leaders on their toes. Many ministers and senior leaders are vying to clinch a ticket for their sons and daughters with Chief Minister Siddaramaiah himself heading the list as he is determined to field his son Dr Yatheendra from Varuna constituency.The process of issuing the applications for tickets, which was to end on March 5, has been extended by five days following the demand from ticket aspirants. At least 2,000 aspirants have obtained the applications so far and the number is expected to cross 3,000 by March 10, a KPCC functionary told The New Indian Express. 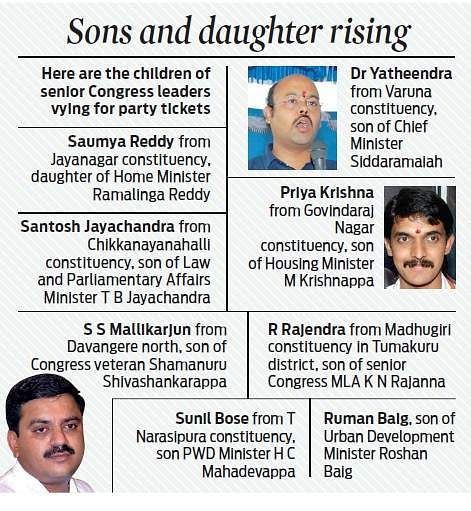 Top leadership of the party, who are already facing attack from BJP for its “dynasty politics”, will have a tough time in finalising the candidates as many ministers and senior leaders have applied for tickets for their sons and daughters. Chief Minister Siddaramaiah himself heads the group as his son Dr Yatheendra has taken the application, while Siddaramaiah will take the poll plunge from Chamundeshwari constituency in Mysuru district.

Congress veteran Shamanuru Shivashankarappa is seeking re-election from Davangere South and his son S S Mallikarjun is set to get the ticket this time too from Davangere North. R Rajendra, son of K N Rajanna, senior Congress MLA from Madhugiri constituency in Tumakuru district, is also set to contest from a constituency in the same district.

With the party extending the deadline for issuing the ticket applications, kin of many more Congress leaders including Ruman Baig, son of Urban Development Minister Roshan Baig, are expected to submit applications for the party tickets to take the poll plunge in the state.