Search for arthritis cure that led to Noni enterprise

SHIVAMOGGA: All roads lead to Raminakoppa, a tiny village in Shivamogga district that has today become pretty famous for the cultivation of Noni, a fruit belonging to the citrus family, and the production of a health drink — Amrith Noni. This is an energising and immunity-booster fruit juice that has become popular in India and other countries since the 1990s and many farmers in the South have taken to its cultivation.

The woman behind this dream project is Ambuja Shreenivasmurthy whose farm enterprise has won ISO 9001: 2015 accreditation and AGMARK certification. She has recently won the Aryabhata International  Award.In the challenging agro-industrial scenario, Ambuja says she is ably supported by her husband Shreenivasmurthy.

Going round the vast farm that also houses some of the rarest of the rare aromatic and  medicinal plants, the Shreenivasmurthy couple says that the cultivation of Noni and the production of the juice started on a very small scale in 2004 with the production of just one litre. Their enterprise took off only in 2011 as legal licences took a lot of time.

Today, their farm enterprise —ValYou Products R — is producing more than 2,000 litres per month and popularising it in Shivamogga, Bengaluru, Davangere among other districts. The demand for their fruit drink is only through  word of mouth as the testimony of hundreds of patients has helped the couple to get a proper feedback and spread its usage across Karnataka.

Day in and day out, people drop in at their five-acre verdant farm at Hosahalli to know more about this wonder fruit and its juices that has  found acceptance as a super food and is now being prescribed by the medical community in  India. They have their production unit on the farm premises where every fruit is selected and the juice extracted hygienically in an  environment that is dust- and insect-proof through the reverse osmosis method.

The story behind the launch of this enterprise is pretty interesting. Ambuja’s husband Shreenivasmurthy (now the MD of this company) who was ailing from severe arthritis and was bedridden was advised by a doctor to try out Noni juice. Wonders of wonder, he started walking and became fully active after taking this fruit extract for six months. Overwhelmed by its curative powers, his wife Ambuja decided to make this juice available to the society at affordable prices.

Ambuja says, “We harvest 8-10 times a year as it is a bushy, evergreen tree. We are presently extracting and processing  2,200 litres of Noni juice every month. On an average, the production is 25,000 litres per  year. Further, seven farmers are contributing the fruits grown on 20 acres in and around  Hosahalli as per our needs and requirement.”

Shreenivasmurthy says, “Every part of this wonder plant -- be it leaves, roots, bark or fruit --is used in the treatment of diseases. One tree gives 10 kg of fruit and 8 harvests per year. Although Noni fruit is somewhat tasteless with an unpleasant  smell, they are processed without disturbing its nutritive and medicinal values. Thanks to Dr Ralph Heinicke, a German scientist who discovered the presence of a vital molecule called  proxeronine in this fruit which is essential for correct functioning of the body. It can also  stimulate the body to produce more nitric oxide that prevents and helps to control various disorders.” 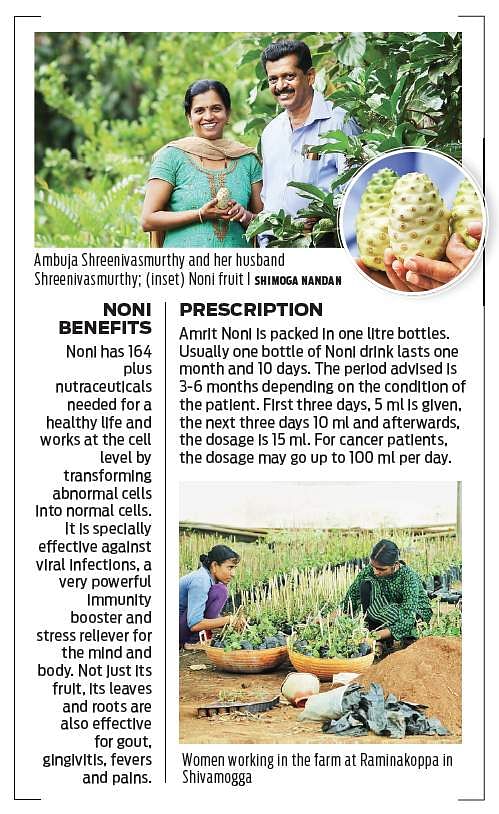