I am the captain leading from the front: Siddaramaiah

"I am the captain leading from the front. I have no fear nor tension as I am confident of Congress victory," said Chief Minister Siddaramaiah.

MYSURU: "I am the captain leading from the front. I have no fear nor tension as I am confident of Congress victory," said Chief Minister Siddaramaiah. 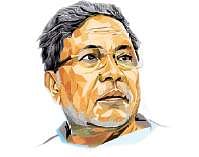 Siddaramaiah called on the Congress workers who were injured in group clash with JD (S) workers at Nagahalli. He said that if the captain leads from the front, soldiers will march ahead with confidence.

He told reporters that Congress will come back to power and he will be the Chief Minister.

Asked about the Prime Minister Narendra Modi bringing up the Hublot watch controversy, he said that it is unfortunate that Modi has stooped to that level.

"On the other hand I am happy that he his taking my name very frequently as he his scared of me," he said.

The PM should also tell from where he gets his suits and if he has paid the tax for it. "Am I wearing watch in the photograph. Let them furnish the evidence," he added.

Maintaining that he has already furnished records from where he got the watch , he said that the BJP wants to bring up Hublot watch issue as they have no other issues to corner the government with.

Stay up to date on all the latest Karnataka news with The New Indian Express App. Download now
TAGS
Siddaramaiah Congress Chief Minister.