Result here will be after-effect of demonetisation and GST

Chickpet that constitutes six wards  is a densely populated constituency in the heart of the city.

BENGALURU: Chickpet that constitutes six wards is a densely populated constituency in the heart of the city. Defeated by Dr Hemachandra Sagar of the BJP in 2008 elections, R V Devraj, 60 yrs, went on to win from the constituency in 2013 against businessman Uday B Garudachar, who then contested on the BJP ticket. Devraj wishes to continue that hold.

Poor infrastructure, pollution, sanitation, drinking water, dug-up roads that were the main issues ahead of the previous polls, continue to be problems here. Not enough has been done to decongest the area, despite the arrival of Namma Metro. But the area addresses the issue of unemployment rather effectively. Devraj’s son Yuvaraj is the corporator of Sudhamanagar. Devraj is known to hold ‘Janata Darshan’ at Mysore Bank Circle in a flamboyant way.

He is also known to give free education and accommodation to poor students through hostels run by his Trust. Understanding the pulse of the voters, especially in areas where Tamil-speaking people and slum dwellers live, Devraj organises food for them during festivals, making him popular in the constituency.
Uday B Garudachar of the BJP is accessible only during elections, rue most people of the area. As this is the first election after demonetisation, voters of the constituency say the many traders here will support the Congress as their business was hit by DeMo as well as GST. This apart, Dr Hemachandra Sagar, who has been given the JD(S) ticket this time after the BJP refused him one, could pose a threat to both the BJP and Congress candidates. 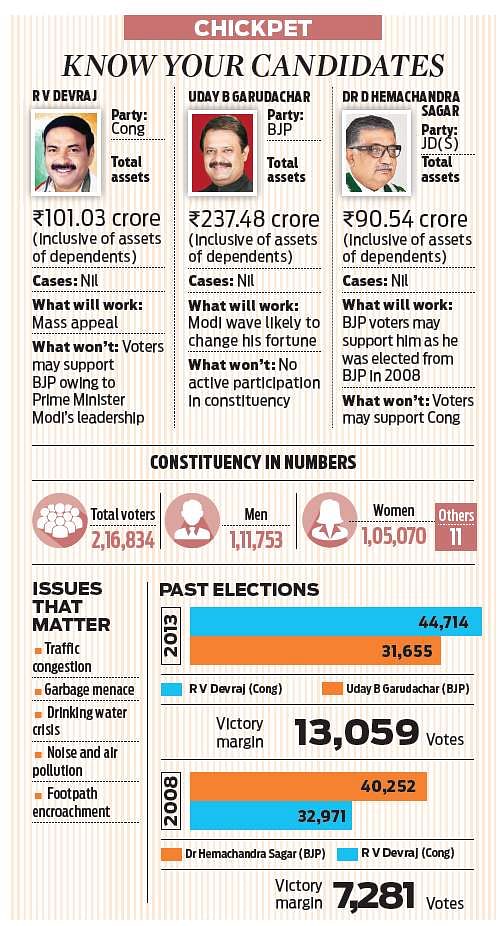 Stay up to date on all the latest Karnataka news with The New Indian Express App. Download now
(Get the news that matters from New Indian Express on WhatsApp. Click this link and hit 'Click to Subscribe'. Follow the instructions after that.)
TAGS
Chickpet R V Devraj Uday B Garudachar