Addressing a public meeting at RNS College Ground in Murdeshwar, he said Murdeshwar, which is known as the place of Lord Shiva, is defamed because of jihadi forces in the region. Recalling the communal riots taken place in Bhatkal during 1993, in which 17 people were killed, he said this election is not just a common election. It is an election to ensure security of the country and fight against jihadi forces. 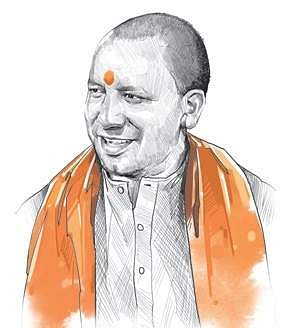 He called upon Hindus to stay united and said else the anti-social elements will take the advantage of division in Hindu society.

Recalling Dr U Chittaranjan, former Bhatkal MLA who was assassinated in 1996, he called upon people to carry forward the fight started by Dr Chittaranjan in Bhatkal. Yogi said the entire beautiful coast of the region is taken over by jihadi forces and the present government in the state is helping them.

"The people of rest of India are afraid by the name Bhatkal, which has become synonymous for terrorism. By electing the BJP in the constituency, we should change the identity of Bhatkal into a town of temples," he said.

Accusing the state government of playing into the hands of anti-national forces, he said the secret agenda of Chief Minister Siddaramaiah was to divide the society to gain political mileage.

In Kumta, Adityanath spoke about the suspicious death of Paresh Mesta. When Mesta was killed, the state government tried to save the culprits. It also delayed investigation and hand over the case to CBI. The state government, which adopts a vote bank politics, has been dividing the society. He promised that the BJP will give security to all.

Terming Siddaramaiah as anti-development and anti-farmer, Adityanath said as the state government promote mafia, it doesn't have time for farmers. The Uttar Pradesh government waived loans upto Rs one lakh availed by 86 lakh farmers from both cooperative and nationalised banks. Why can’t Siddaramaiah take such actions in the interest of farmers, he asked.

He said the same party should be in power in the state and the Centre. Only then development will gain speed as there will be coordination between two governments. The BJP assures good governance and development. Therefore, all people should support the party in the upcoming assembly elections.

Meet Covid and Corona -- twins born during the lockdown in Chhattisgarh