After two wins, it will be a tough battle this time for BJP nominee

Though Bengaluru South has been a BJP bastion the last two assembly elections, this time it will not be an easy win for the saffron party here.

BENGALURU: Though Bengaluru South has been a BJP bastion the last two assembly elections, this time it will not be an easy win for the saffron party here. BJP candidate and present MLA M Krishnappa is said to have ignored the poor in his constituency. In fact, he did not go campaigning to slums and village areas, where drinking water shortage is a haunting issue.

He will also face a tough competition from Congress candidate R K Ramesh, who has the backing of Home Minister Ramalinga Reddy and Member of Parliament DK Suresh. With a large number of Reddy community people in the constituency, the home minister’s backing could go a long way for Ramesh. Also, he is said to have done a good amount of groundwork in the constituency for the last two years, in preparation for this year’s assembly elections. Also, the Reddy community votes are likely to be split as the JD(S) candidate R Prabhakar Reddy is another Reddy contesting this election.

As far as the BJP candidate is concerned, people call him “real estate friendly”. In Bengaluru South, one can see apartments in every nook and corner. This booming real estate has irked the residents of nearby villages who have been residing here for generations. The MLA, on the other hand, is said to be encouraging real estate.When it comes to the JD(S) candidate, though he also started the ground work here more than a year ago, he does not seem to have made much of an impression among people. 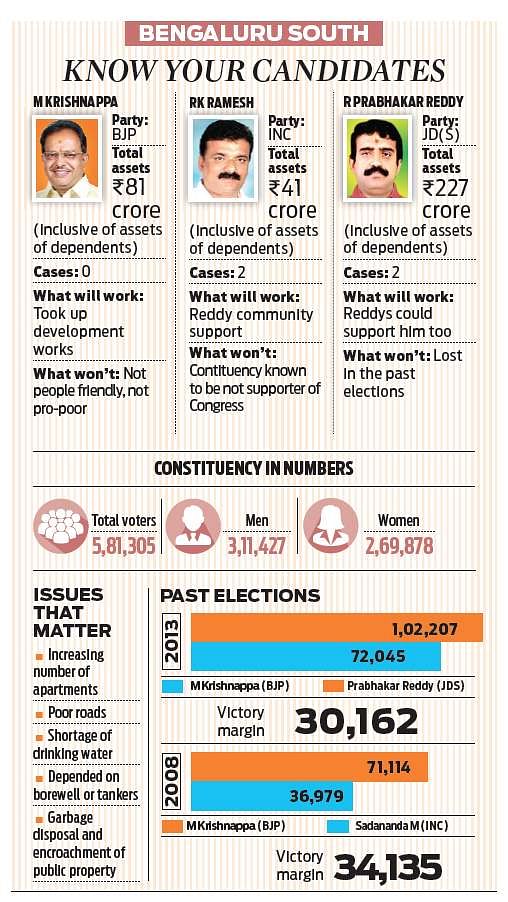 Stay up to date on all the latest Karnataka news with The New Indian Express App. Download now
TAGS
Bengaluru M Krishnappa BJP