Flooding in low-lying areas, garbage menace, drinking water crisis and lack of parking space are some of the problems plaguing Gandhinagar.

BENGALURU: Flooding in low-lying areas, garbage menace, drinking water crisis and lack of parking space are some of the problems plaguing Gandhinagar. Despite it all, Dinesh Gundu Rao, son of former CM R Gundu Rao, seems to be a favourite in this Sandalwood hub. The face of the area changed with many theatres converted into malls. Only a place for theatre activities ‘Gubbi Veeranna Rangamandira’ still survives rampant commercialisation. Besides the regular grievances, there’s also one about the absence of a lung space in the locality.

BJP has fielded A Sapthagiri Gowda, son of former minister Ramachandra Gowda, a new face. This entrepreneur is testing his luck, and Modi wave could help the party make an inroad here. Former corporator V Nagaraj, contesting as an independent, could pose a challenge for Rao. Nagaraj made some news when he took poison during a  press conference, accusing cops and Rao of spoiling his political prospects, but Rao said he did not know him at all.

Nagaraj’s efforts may grab Tamil votes in wards such as Okalipuram, Sriramapuram Chickpet, Cottonpet, Binnypet and Subhash Nagar. In this constituency, the business community seems to be supporting BJP, but they could take a different view if they are convinced that DeMo and GST have affected their businesses.

JD(S) candidate V Narayanaswamy, from SC community, has been working hard for the past two years. All his hardwork may make Rao sweat because SC votes are a deciding factor here. Rao’s recent remarks against UP CM Yogi Adityanath led him to apologise later but it may be a  small setback. 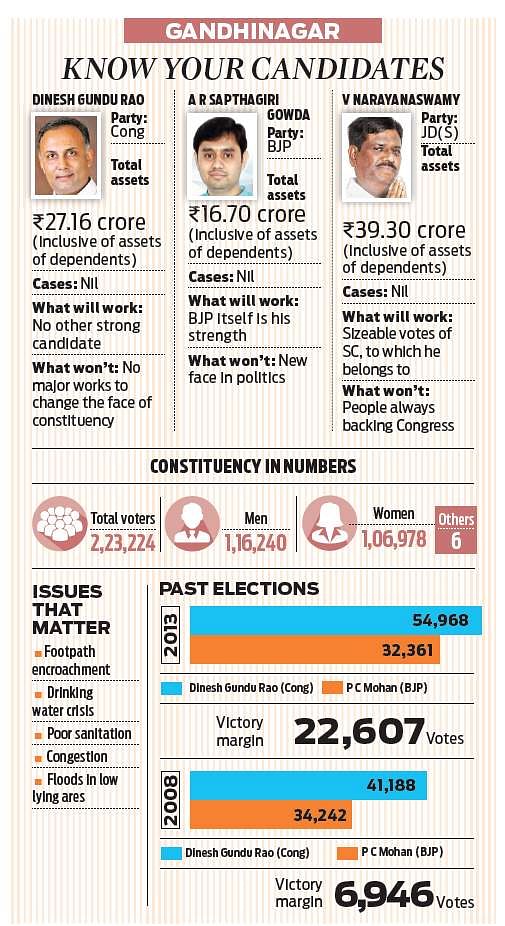