Mayor to fight three-time MLA in this constituency

C V Raman Nagar constituency houses tech companies, slums, public sector undertakings and is a mix of middle-class voters and those from the lower economic strata.

BENGALURU:  C V Raman Nagar constituency houses tech companies, slums, public sector undertakings and is a mix of middle class voters and those from the lower economic strata. It’s problems are varied and the voters are not combined by any one pressing issue. The constituency is seeing strong contenders in not just the two major national parties -- three-time MLA S Raghu from the BJP and Bengaluru Mayor R Sampath Raj from Congress but also JD(S) candidate P Ramesh, who was previously in the Congress and lost by a margin of 8,419 votes to S Raghu in 2013 elections. 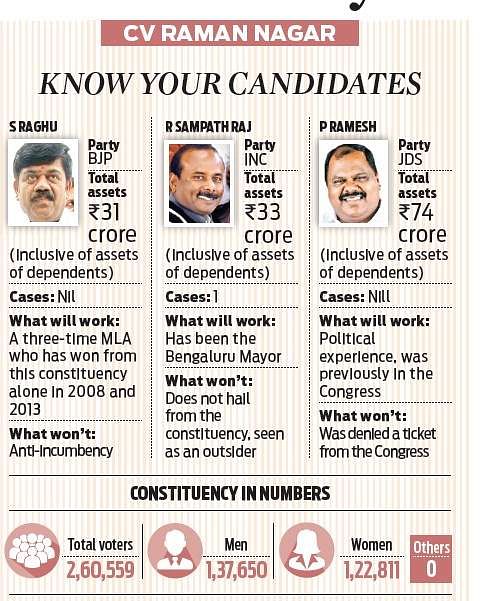 AAP candidate Mohan Dasari who is an engineer turned politician is expected to at least split votes. He has contested both the assembly elections in 2013 and general elections in 2014 but lost both the times.

Praveen S, social media team member, I Change Indiranagar, which is a confederation of eight RWAs said the concentration of 114 pubs, bars and breweries in any single location is not there anywhere in the country but in Indiranagar, on 100 feet road. We even have a HC order against such activities that is yet to be implemented. The noise from these pubs and bars have to be insulated according to building bylaws but that isn’t happening,” Praveen said.

The residents say they have brought it to the notice of the Mayor who is also contesting elections from there now but have not seen any reprieve. Sampath Raj is seen as an outsider by a few as he ius contesting from a constituency that is not his own but he has experience of working on areas that fall under it, he claims.

Stay up to date on all the latest Karnataka news with The New Indian Express App. Download now
(Get the news that matters from New Indian Express on WhatsApp. Click this link and hit 'Click to Subscribe'. Follow the instructions after that.)
TAGS
C V Raman Nagar MLA Karnataka