They were moved from one spot to another due to ‘security concerns’ and finally checked  into Hyderbad’s luxury hotels where they were given massages and took mudbaths. 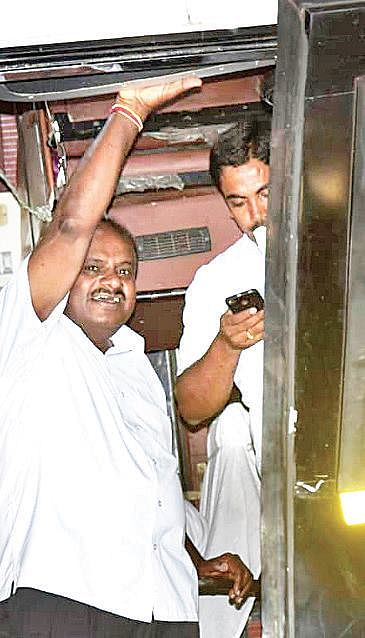 BENGALURU/HYDERABAD : The Congress that is putting up an aggressive front to protect its legislators from BJP’s alleged attempts to woo them is said to be keeping a close watch on its leaders. So much so, a few MLAs have reportedly expressed their displeasure about it.They were shifted from a resort near Bengaluru to a luxury hotel in Hyderabad. “They were all fine till Thursday when they were camping in Bengaluru. But after shifting to Hyderabad, they expressed their unhappiness,” said a source in Congress.

On Friday, the Congress-JD(S) MLAs started back to Bengaluru by flight and by road.
A day before, on Thursday, Congress MLAs, along with JD (S) legislators were taken to Hyderabad in three buses. “Soon after the election results declared on Tuesday, they were asked to come to Bengaluru on Wednesday. They travelled all the way from North Karnataka to Bengaluru. Again on Thursday they were made to travel by road to Hyderabad. Now Friday, another journey. Almost every day, they have been travelling for the last three to four days,” sources said.

Sources said a close watch was also kept on calls received by the Congress leaders to ensure that they are not contacted by BJP, which is allegedly trying to woo them. However, amid political activities a few legislators took time out to visit spa at the star hotel for mudbath and body massage, while they also enjoyed good food, while discussing possible outcome of the trust vote, sources said.

For most part of the day, senior leaders kept talking to legislators and explaining to them about the need to defeat BJP in the trust vote. “We have instructed all MLAs to vote against B S Yeddyurappa, and thus make H D Kumaraswamy as Chief Minister. There is no question of cross voting. All our MLAs are with us,” said former Home Minister Ramalinga Reddy who flew to Hyderabad along with Siddaramiah and other leaders on Friday afternoon. Reddy said they are returning to the city Saturday early morning.
“We have no worries. Our leaders are taking care of everything and we will do according to their instructions. Kumaraswamy will be our next Chief Minister,” Gopaliah, JDS MLA from Mahalakshmi Layout said. “All of us are friends here. We are chatting and having good time,” he added.

KPCC Working President Dinesh Gundu Rao said in the series of meeting at Hyderabad, the senior leaders from Congress interacted with all their MLAs. “We have given them a list of do’s and dont’s. BJP is trying to reach our MLAs. But we have instructed MLAs not to yield to their tactics and this time we are more stronger and united. Two more MLAs — Anand Singh and Prathap Gowda Patil — are in touch with us and they are joining us at the floor on Saturday. BJP even threatened and blackmailed our MLAs, but they are strong,” he said.

Meanwhile,  JD(S) state chief H D Kumaraswamy alleged that two of his party MLAs hadbeen hijacked by the BJP. ‘’The BJP has hijacked two of our MLAs. One of them is in Kochi and is going back to Bengaluru and the other MLA’s whereabouts are not known. But I am hopeful that both will return at the time of the floor test,” alleged Kumaraswamy.

Vacation in Hyderabad under tight security
Over a hundred MLAs were cramped into the two buses, until a third one was arranged about an hour after the 580-odd-km journey to Hyderabad began from Bengaluru. The convoy of buses covered 500 km in just eight hours and made the first stop about 80 km ahead of the city for a tea break, at 5 am Friday.While Congress legislators reached Taj Krishna at Banjara Hills, JD(S) members got a city darshan as they were first taken to a farm house, then to Park Hyatt before finally settling down at Novotel in Hitec City. Overzealous hotel security staff denied entry for anyone else into the Taj, including journalists.

But, the Congress memebrs could be seen walking around the lobby and hotel premises. Soon after, Congress leaders from Telangana and Andhra Pradesh arrived at the hotel.The entire drama resulted in minor traffic snarls and city cops maintained they were not informed of these VIP guests coming from Karnataka. Police got a wind of their arrival from the traffic snarls and reached the hotel. Within minutes, they cordoned the entire area and allowed only guests staying at the hotel. A sub-inspector and two police constables were posted at the hotel to keep an eye on the ongoing developments.

Departure from Hyderabad Around 10 pm on Friday
Kumaraswamy along with five MLAs took a flight back to Bengaluru, while the remaning lawmakers started for Bengaluru by road. They were escorted by the Telangana police till the border after which the police of AP took over.

Now we are on Telegram too. Follow us for updates
TAGS
Congress MLAs horse trading Karnataka power struggle Kumaraswamy

AC Milan cut financial losses in half despite pandemic