As soon as BS Yeddyurappa submitted his resignation in the speech and left to meet the governor, BJP legislators raised slogans as national anthem was being played | PTI 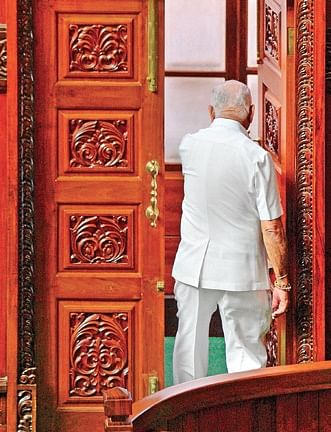 BENGALURU: During the end of the floor test on Saturday, BJP legislators walked out as the national anthem was being played at the end of the first session of Fifteenth Assembly.

As soon as BS Yeddyurappa submitted his resignation in the speech and left to meet the governor, BJP legislators raised slogans against the JD(S)-Congress coalition. It was at the time national anthem was played.

BJP legislators, including pro-tem Speaker KG Bopaiah left the Assembly hall hastily. Bopaiah, however, was alerted by the martials. While BJP legislators left, Bopaiah walked back in the middle of the anthem and stood till the end.