While the swearing-in ceremony of former chief minister B S Yeddyurappa was a simple affair held at the Glass House of the Raj Bhavan, H D Kumaraswamy wants it to be a mega event that could see partic 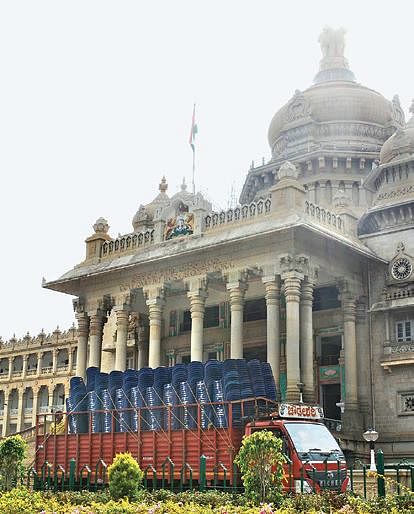 BENGALURU: While the swearing-in ceremony of former chief minister B S Yeddyurappa was a simple affair held at the Glass House of the Raj Bhavan, HD Kumaraswamy wants it to be a mega event that could see the participation of about 2 lakh people.The swearing-in ceremony will be held on the grand steps of Vidhana Soudha. “I am expecting about 2 lakh people to arrive in Bengaluru from various parts of the state to witness the event,” Kumaraswamy said.

Earlier in the day Chief Secretary Ratna Prabha and DG & IGP Neelamani Raju met CM-designate Kumaraswamy at his residence in JP Nagar and discussed about the preparations for the ceremony.

Kumaraswamy later called on his father H D Deve Gowda at his Padmanabha Nagar residence and discussed about modalities for the composition of the ministry. He also met JD(S) MLAs lodged at a hotel in the city.

Families of Kumaraswamy and his brother H D Revanna left for Tiruchi later in the evening to offer puja at Rananatha Swamy temple in Srirangam. “There is no special significance for the puja. We frequently visit the temple in Srirangam,” he said.

Now we are on Telegram too. Follow us for updates
TAGS
Vidhana Soudha Yeddyurappa HD Kumaraswamy