This alliance is not good for Congress in long term but we had no option, says KPCC President Parameshwara

Post-elections, Congress leaders in the state moved at an astonishing speed to prevent BJP from coming to power by joining hands with JD(S), the party against which they had fought a bitter electoral 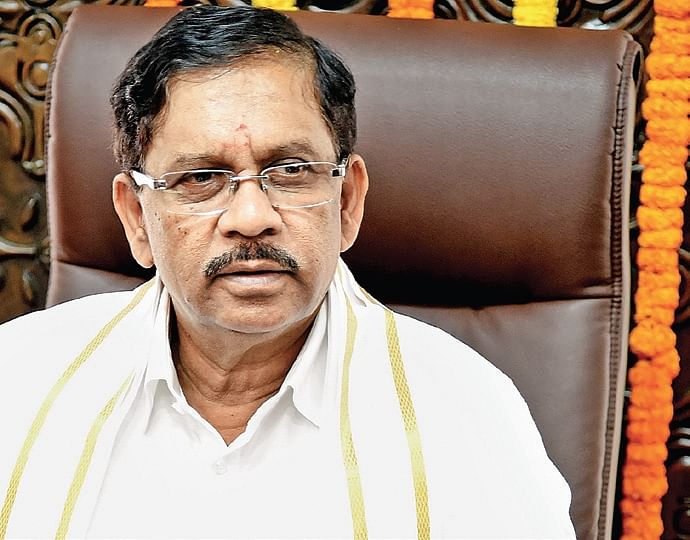 BENGALURU: Post-elections, Congress leaders in the state moved at an astonishing speed to prevent BJP from coming to power by joining hands with JD(S), the party against which they had fought a bitter electoral battle. KPCC President G Parameshwara, who is now tipped to becoming DyCM in HD Kumaraswamy-led government, says that this was the only option before them to stop BJP from coming to power.

Q: Will you be the DyCM?

A: We have not discussed this issue at high-command level or at our level. First, we have to form the government and keep the BJP away. That is our priority and that is what we are working on. All modalities, including how many ministers and portfolios we should get, are yet to be discussed.

Q: When will it be decided?

A: Most probably, ministers will be decided after the vote of confidence (on May 24).

Q: How did the Congress manage post-elections developments so swiftly?

A: Past experience taught us that we should act fast. In Goa and Manipur, we delayed a bit (in responding) and they used that to their advantage. So, we decided to move fast this time. By the time the final results were out, we knew that we were going to fall short of numbers. We could go with a coalition or sit in the opposition. However, if we picked the opposition, we knew BJP will go with the JD (S) and we did not want that to happen and took an immediate call. State and central leaders worked together. Ghulam Nabi Azad was here during that time.

Q: At any point in time, did you think that the BJP will get your MLAs and prove majority?

A: We knew that they had to get eight to ten MLAs and that is not easy. We took the MLAs away and did not give them (the BJP) any access to our MLAs.

Q: Do you think this coalition will work, as Congress fought bitterly against JD(S)?

A: I think it should work because fighting at grass-root level was an ideological commitment for both of us.

Q: Is it fear of BJP that keeps you together?

A: Well, that is the reason why we have come together, to keep them away. People may not realise the damage BJP can do to the state. Their administration is very bad and hopeless. There is no development agenda as they spend most of the time creating divisions. That is the situation in all BJP-ruled states -- UP, MP, Gujarat, Rajasthan or others. We were afraid as Karnataka is not such a state, it has always been peaceful, always inclusive. We do not want them to make an entry into South and spread that kind of atmosphere in southern states such as Kerala and Tamil Nadu.

Q: Do you think this alliance is in the best interest of Congress and it's growth in Karnataka?

A: If you ask me as a true Congressman, it's not good. But we had no other option, unless there is another election and we win with a majority. Till such time, we need to work together and build our cadre for next elections and come back with full majority.

JD (S) may also do that. They too may be thinking that they have the position (power), why not build the cadre and come back with bigger numbers. These small battles will always be there and we have to adjust, and our cadre needs to be strengthened in all 224 constituencies. We will not give up any constituency, including those won by JD (S). We will not give up on our cadre or discourage them. If we do that, they will join JD(S) or other parties.

Q: Will Congress and JD(S) face parliamentary elections together?

A: We have not discussed it yet. Parliamentary election is another indicator and we want to win most of the seats.

Q: What went wrong for the party in elections? Was it over dependence on Siddaramaiah?

A; No, we were not depending only on him, although he was projected as a leader for election. Rahul Gandhi came and all of us worked. All of us travelled. All of us, including Siddaramaiah took the decisions together.

Q: Siddaramaiah has been elected as CLP leader even though the election was lost under his leadership?

A: It was difficult for us to hold an election when coalition talks were on and we had to keep our MLAs together. Although he may not be joining the government, he is an MLA now. Let's see what happens after formation of the government.

Q: Have you looked into reasons for party’s poor performance in elections?

A: We will examine it in detail. I am going to set-up a committee and we will sit with party workers and analyse the reasons. We will take corrective measures before parliamentary elections.

Q: Was is a mandate against Congress government?

A: We have to keep in mind two or three factors. We would have definitely won a seat like Mangaluru City as 80 per cent voters in that constituency are minorities. How can BJP win in that constituency as it is against minorities? What we had suspected about EVMs would have taken place. Also, our programmes reached people, but did not convert into votes. We did our best with selection of candidates.

Q: You are saying that EVMs were tampered with?

A: Yes. What happened in Vijayapura district (VVPAT carrying cases were found in a village) and in Sanjay Nagar in Bengaluru (Polling was postponed after EVM malfunctioned in one booth)? Press any button and votes were going to BJP. How is it possible? Someone was telling me that a person goes into voting booth and puts a small chip under the machine and votes and comes out. He is a real voter and no one will notice what had happened. When voting is almost over, another person, again a voter, will go and take it off and come. When the chip is in place every vote will go for BJP. I have not seen a demonstration. I cannot prove or show it, but there is a possibility.

Now we are on Telegram too. Follow us for updates
TAGS
Congress JD(S) KPCC Parameshwara BJP