Other members of the council of ministers will be inducted after the Kumaraswamy government wins the trust vote on Friday. 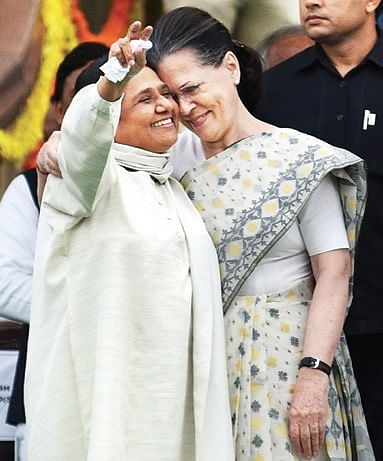 BENGALURU: In a loud and clear warning to the BJP about the tough electoral battles ahead, H D Kumaraswamy on Wednesday took oath as Chief Minister of Karnataka in the presence of top leaders of non-BJP parties from across the country. The event on the grand steps of Vidhana Soudha not only sealed the coalition deal between JD(S) and the Congress in Karnataka, but also showed the country a glimpse of what a political front to take on the BJP could look like.

Amid much fanfare, elaborate arrangements, jubilant celebrations by supporters and a galaxy of political bigwigs, Kumaraswamy was sworn in by Governor Vajubhai Vala. Karnataka Congress chief G Parameshwara created history by becoming the first Dalit Deputy Chief Minister of the state. Thousands of people braved heavy rain to witness the oath-taking ceremony that was nothing short of historic with leaders from non-BJP parties putting up a great show of unity and camaraderie.

“This is a first of its kind event where all these leaders have come together,” Kumaraswamy said during his first interaction with media after taking over. “We have successfully tamed the BJP’s ‘Ashwamedha horse’ and this will continue,” he said.

At 4.16pm, Kumaraswamy, clad in white shirt and dhoti, arrived at the stage set up for his coronation accompanied by wife Anitha. He took oath in the name of God and the people of Karnataka as his father former Prime Minister H D Deve Gowda, brother Revanna and the entire Gowda clan watched and the crowd that had gathered on the road between Vidhana Soudha and the High Court cheered on.

BJP leaders from the state as well as central ministers skipped the event. The BJP led by B S Yeddyurappa staged a statewide protest against what it called “subversion of mandate”.

Now we are on Telegram too. Follow us for updates
TAGS
HD Kumaraswamy Karnataka JD(S) Congress

Anirban Lahiri T-32 after second round at American Express