Supporters of JD(S) were most visible and audible shouting slogans and chants to welcome Kumaraswamy as the leader of state. 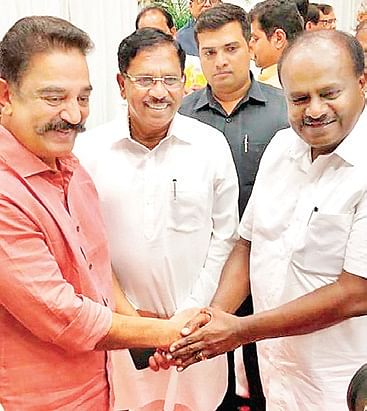 BENGALURU: At least 20,000 people thronged outside Vidhana Soudha late on Wednesday afternoon despite heavy rains to witness the swearing-in ceremony of the Karnataka's new Chief Minister H D Kumaraswamy. Just an hour before the event, the rains had threatened to disrupt the ceremony.

Party workers and supporters — mainly of JD(S) coming from North Karnataka and Old Mysuru region — flooded Ambedkar Veedhi outside Vidhana Soudha, on the steps of which Kumaraswamy was sworn in as the 25th Chief Minister of the State. The workers rented the air with supportive slogans for him and JD(S) supremo H D Deve Gowda. 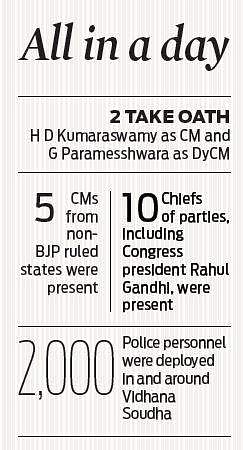 The excitement was most shrill among the supporters of “Kumaranna” who shouted slogans of “Kumaranna ki jai”, which was followed by bursting of crackers, singing and dancing to drumbeats.

Many among these supporters and party workers exuded confidence that Kumaraswamy would be able to hold the JD(S)-Congress coalition together and deliver stable governance to the state for a full five-year term. Many even described Kumaraswamy as a “messiah” for the farming community of the state, who would ensure a more comfortable life for them in the near future.

A Nanjangud farmer Maheshappa said, “The JD(S) has genuinely done a lot for the farmers. Kumaraswamy has no hidden agenda, but only good will, when he helps farmers.”

Such was the positivity among the festive gathering that the torrential rain that bathed the city just two hours before the 4.30 pm-scheduled swearing-in ceremony failed to dampen the spirit of the cheering crowds.

The gloomy weather was no deterrent to the pan-Karnataka crowd at Vidhan Soudha which had made its way since early morning from different parts of the state. Many considered the rain to be a good omen and perceived it as “blessings from God” on an “auspicious occasion”.

One farmer who had come from Mandya to witness the event, said: “Rain is a good omen for the people of Karnataka. Look at the huge crowd assembled here… it shows the unwavering support for the winning party, rains or not!”

But it was not just witnessing the event that brought the crowds here. There was hope for the future too — a future that could make space for a non-BJP front at the Centre with the Lok Sabha elections scheduled next year.

As national and state-level leaders from various celebrating parties took the centre-stage to congratulate HDK, they received loud cheers from the crowds. Kumaraswamy, Devegowda from the JD(S), senior Congress leader DK Shivakumar, and the Congress high command members Sonia and Rahul Gandhi received the loudest applause as they waved to the crowd.

A Bahujan Samajwadi Party (BSP) supporter attending the ceremony, and who was visibly excited at seeing his leader Mayawati, too, taking the centre-stage to wish Kumaraswamy on his new role and hugging Sonia Gandhi, said “This coalition will lead the path of progress in Karnataka, and HDK will give us a good standing in the ruling government. The combined political might of Kumaraswamy and Mayawati can topple the BJP in the 2019 elections.”

Bengaluru’s traffic spares none, especially after heavy rains. Legislators got a taste of how traffic restriction for VVIP movement affects common folk. Buses ferrying Congress and JD(S) MLAs for the swearing-in ceremony were caught in a traffic jam due to restrictions imposed by the traffic police. People going to Vidhana Soudha by foot overtook the legislators travelling in the luxury buses thanks to the traffic jam.

Election of Speaker of State Legislative Assembly will be held on Friday and on the same day Chief Minister H D Kumaraswamy will seek the trust vote. Assembly secretary has issued a notification on the election. JD(S)-Congress have decided to elect former speaker and Congress leader Ramesh Kumar as the Speaker and a JD (S) legislator will be elected as Deputy speaker. However, it is still not clear if the BJP, which is the single largest party in the assembly, will field its legislators for speaker and deputy
speaker’s elections.

Despite his sudden plan to visit Tuticorin, actor-turned-politician Kamal Haasan made it to Bengaluru albeit after the swearing-in ceremony. Dressed in silk shirt and dhoti, the actor met the political bigwigs who were in attendance over tea inside Soudha. Although fashionably late, Kamal Haasan was welcomed by H D Kumaraswamy and Siddaramaiah.

A person with just 37/222 has insulted the people’s mandate to become CM. Sad day for Karnataka. People of Karnataka will never forgive him n Congress for this. They will ensure big defeat for Congress n JDS in next elections that will come very soon.