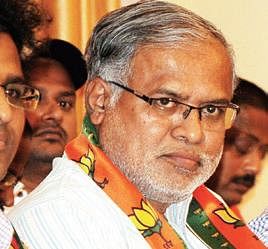 BENGALURU: The H D Kumaraswamy government that took over on Wednesday will face a trial of strength in the Karnataka assembly on Friday, but the first test for the JD(S)-Congress coalition will be election of the Speaker that will precede the vote of confidence.

Brushing aside the embarrassment it suffered during the confidence vote faced by the short-lived Yeddyurappa government, BJP has fielded former minister Suresh Kumar as its nominee for Speaker against senior Congress leader Ramesh Kumar, who has entered the fray as the candidate of the Congress-JD(S) coalition.

This will be the first time the numbers on either side will be tested on the floor of the assembly as Yeddyurappa had resigned before taking the trust vote.

Election for the Speaker’s post will be held at 12.15pm and it will be followed by the floor test. Chief Minister Kumaraswamy is expected to win the vote of confidence as the JD(S)-Congress combine has a strength of 117 MLAs against BJP’s 104 in a House with an effective strength of 221.

Not taking any chances, both Congress and JD(S) have issued a whip to their MLAs to support the confidence vote and back Ramesh Kumar for Speaker’s post. JD(S) MLAs, who have been put up in a resort, and Congress MLAs, lodged in a star hotel, will be brought to the assembly in buses under tight security to participate in the assembly proceedings. BJP too has issued a whip to its MLAs to vote against the Kumaraswamy government, which took charge on Wednesday.

While Congress and JD(S) have kept their flocks together under tight security and surveillance, the BJP leadership is hoping to exploit the differences within the coalition over sharing of ministerial berths and modalities of the coalition.

“Yeddyurappa is making an open offer for horse-trading. It is shocking to see a party president doing it openly,” Parameshwara said.

Suresh Kumar, who submitted his nomination papers on Thursday, expressed confidence of emerging victorious. When asked about the numbers, he said: “Just wait till tomorrow and see.”

“Ramesh Kumar has rich experience and vast knowledge of procedures of conducting the House. His election is a mere formality as we have a comfortable majority,” he said. Kumar, a 6th time MLA from Srinivasapura constituency in Kolar district, had earned accolades during his earlier stint as Speaker from December 27, 1994 to October 24, 1999 when the state had H D Deve Gowda and later J H Patel as Chief Ministers.