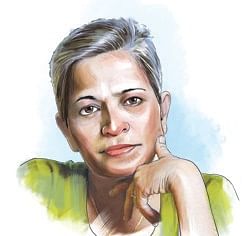 Praveen who was earlier arrested in connection with an Arms Act case, is shown as an accused in the Gauri murder case.K T Naveen Kumar, who was the first person to be arrested in the case, had revealed  Praveen’s alleged involvement in the murder. Based on that, the SIT had named Praveen as accused number two in the documents submitted to the III ACMM court. Intensifying the probe to trace Praveen, the SIT gathered information that he was already arrested in connection with an Arms Act case.
Sources said that Praveen was taken into SIT custody after obtaining a body warrant from the court concerned, around two weeks ago.

“It is established that Praveen, along with Naveen, had done reconnaissance near Gauri Lankesh’s house in Rajarajeshwari Nagar several times and had shared details with the shooters about entry and exit routes, without being captured by CCTV cameras. We are questioning him to know about the other persons involved in the murder plot,” an official said.

Naveen Kumar did not share much information about Praveen and was not sure about his real name as he was with him only for a few days. Praveen is said to be a resident of Mangaluru but it is not yet known whether he was associated with any organisation. Naveen Kumar, however, had allegiance with several pro-Hindu outfits, leading the investigators to suspect that ideological differences had led to the killing.
“As of now, we are sure Praveen knows much about those behind the murder than Naveen. We are trying to know on whose behest the murder was executed,” the official added.Meanwhile, the SIT is set to submit the chargesheet to the court on Wednesday and it is learnt that Praveen’s name is also included in it.

Now we are on Telegram too. Follow us for updates
TAGS
Special Investigation Team Gauri Lankesh Mangaluru