Former CM Siddaramaiah's universal health scheme Arogya Karnataka, that was launched on March 2 for 1.43 crore families in the state, was one of the sops announced before the state assembly elections.

BENGALURU:Former CM Siddaramaiah's universal health scheme Arogya Karnataka, that was launched on March 2 for 1.43 crore families in the state, was one of the sops announced before the state assembly elections this year. But the health department is in a dicey situation here with the responsibility of implementing the Centre's National Health Protection Scheme or Ayushman Bharat too. This is one of the Centre's sops announced in the last full budget of PM Narendra Modi's current term ahead of the 2019 General Elections.

Since beneficiaries can't be categorised under the State and the Centre's schemes separately, the State is going to have a "co-branding" scheme merging the Central and state schemes, sources in the state health department confirmed. West Bengal had walked out of Ayushman Bharat and among the states that have signed MoUs with the Centre are BJP-ruled states like Himachal Pradesh, Uttarakhand, Jammu and Kashmir, Haryana and union territory Chandigarh. Congress-ruled Punjab has raised some objections with the Centre regarding the scheme as it has its own health scheme too.

It is the most practical thing to do but defeats the entire purpose of the State even announcing its own health scheme. Effectively with this, the State will spend money but the Centre will get the fame for the scheme as Ayushman Bharat has a 60:40 ratio of spending where the State provides 40 per cent of the funds. This is viewed as an additional burden as Arogya Karnataka is expected to cost the state exchequer Rs 1,011 crore a year. The previous seven health schemes that were subsumed into Arogya Karnataka were costing the health department Rs 730 crore.

According to a government order in this regard issued on March 1, by the end of June this year, Arogya Karnataka that is presently available in only 10 hospitals across the state, including three in Bengaluru, will be rolled out in 33 major and district-level hospitals. By the end of September, it will be rolled out to taluk-level hospitals and by October to community health centres and by December to primary health centres. 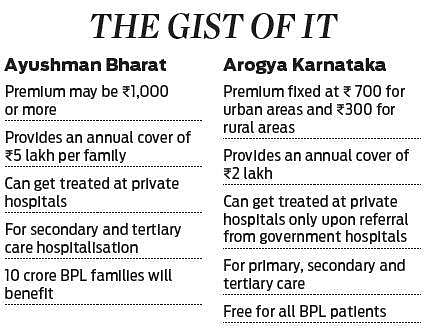