The special investigation team (SIT), probing the murder of journalist-activist Gauri Lankesh, has zeroed in on Parashuram Waghmare as the gunman who shot Gauri on September 5, 2017.

BENGALURU:The special investigation team (SIT), probing the murder of journalist-activist Gauri Lankesh, has zeroed in on Parashuram Waghmare as the gunman who shot Gauri on September 5, 2017.
The team came to this conclusion based on forensic evidence obtained from a gait analysis report by the Directorate of Forensic Sciences, Gujarat. The analysis compares CCTV clips of the assassination — which shows the shooter in the frame for six seconds — with SIT’s visual reconstruction of the crime.

Though Parashuram, an alleged Sri Ram Sene activist from the Karnataka-Maharashtra border, had allegedly confessed to being the shooter, Additional Commissioner of Police B K Singh, who is heading the SIT, had pushed for the case to be backed by strong forensic evidence. After reconstructing the scene, the video clip was sent to the forensic lab. The report has now concluded that, ‘the persons in the two videos are one and the same’.

Sources in SIT explained, “We knew that a mere confession by Waghmare will not hold up in court. We were aware of what was at stake.” The team has also acquired corroborative material evidence though the accused had shunned mobile phones as a safeguard against leaving a digital trail. “The CCTV footage from near Gauri’s house showed three construction workers and a journalism student, all hailing from Raichur, walking on the road, as the gunman and the motorcycle rider sped past them after the murder. The killers were seen turning back and looking at the four witnesses. The witnesses had seen Waghmare earlier when he was not wearing a helmet as they lay in wait for Gauri,” the sources said.

Their statements, along with that of a shopkeeper who had claimed to have seen the men in the neighbourhood during a recce of Gauri’s house, is also available with SIT. While the initial sketches matched, what also strengthened the case, according to the officer, is that the student and the shopkeeper singled out Waghmare during an identification parade. 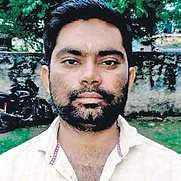 SIT also has circumstantial evidence that Waghmare and another prime accused, Sujith Kumar alias Praveen, had vacated a rented house they were staying in — at Seegehalli, West Bengaluru — just an hour after Gauri Lankesh was murdered. The house owner Suresh had identified Waghmare and Praveen. Meanwhile, initial forensic analysis of CCTV footage from Gauri’s house estimated the height of the shooter at 5 feet 2 inches, which matches Waghmare’s physique. The SIT is now waiting for the ballistics report of 17 country-made pistols and also the one black pistol found during the Nalasopara arrests of right-wing activists and the arrest of Sachin Andure.

Forensic podiatry and gait analysis was first used in the UK about 18 years ago. The increasing use of video surveillance or CCTV  suggests a greater likelihood of criminals being recorded committing crimes or while they are departing/arriving at a scene of crime. However, investigators who observe a criminal walking or running on video may not be able to make an identification by facial features, which may be obscured by poor lighting, poor camera angles, the use of a mask or other factors. A forensic podiatrist may be able to link a suspect to the criminal act by analysis and comparison of his/her gait.

Gait refers to the “manner or style of walking.” While walking refers to one specific manner of locomotion, gait refers to both walking and running. To utilise forensic gait analysis in a case, investigators must have identified a suspect and, prior to making an arrest, surveillance video of the suspect should be obtained.

Once investigators have s video of the suspect, a forensic podiatrist can then analyse it and compare it with video of the criminal. The specific features and characteristics of the gait of the suspect and the individual in the surveillance video are compared for similarities and differences with regard to motions, positions, and structure.

The Hindu Vidijna Parishad on Tuesday questioned the move by the Special Investigation Team (SIT) invoking the Karnataka Control of Organised Crime Act (KCOCA) on 12 of the suspects arrested in the Gauri murder case. Speaking to the reporters, Veerandra Ichalakaranjikar, national president of the forum, said the government was not acting in the same way when eight RSS workers were allegedly killed by members of PFI across the state.