I have lost my lifeline with her death, says Gauri's mother Indira Lankesh

Between quiet breakdowns mother of Gauri Lankesh talks of how it has been extremely difficult for her to fill the void in her life without her daughter. 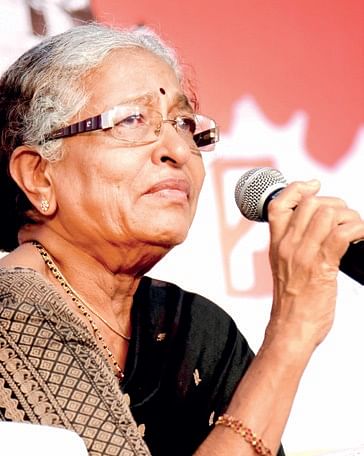 BENGALURU: Every night at 10.30 pm my heart begins to beat faster and my hand reaches out to my mobile phone. I open the phone inbox only to find my daughter’s old messages which read — amma, mane talupide (amma, I reached home). Between quiet breakdowns, Indira Lankesh, mother of Gauri Lankesh, talks of how it has been extremely difficult for her to fill the void in her life without her daughter.

Calling Gauri her “mother”, Indira says, “I can’t express the loss in words. It is really inconsolable and irreplaceable. Every night I look into my phone waiting for her message. Nothing can bring my mother — my Gauru — back to me,” Gauru, for Indira was more than a daughter. Indira recalls how she is very fond of her mother Gouramma and immediately after a girl baby was born to Indira and Lankesh couple, she didnt think twice.

“I had decided to name my daughter Gauri. She was a mother to me in many ways. She is the one who is responsible for the person I am today. She would even encourage me to do a lot of writing,” Indira adds. Recalling how Gauri forced her mother to pen down her memories into a column for Gauri Lankesh Patrike, which later was published as a book, Indira says, “There were many ups and downs in our lives. It was Gauri, being the oldest, who had witnessed and understood it all. She forced me to write my experiences. I am so glad I did that.” she says.

Gauri, even though was very close to her father, she always wanted her mother around. Indira says, “Especially after her divorce I started living with her and I was very close to her. I began to live with Kavitha’s family only recently as the latter got busy with her movie schedules and I had to be with my grand daughter.”

“She always respected women and lived her life only for the sake of others. She was so concerned about others. There have been many times when I would tell her, why do you want to do all this? Why do you give yourself so much to activism? You won’t even earn anything from this,” Indira recalls. But today, Indira says, this activism of Gauri has earned her tremendous respect and love of people. Gauri’s murder has been hard on the family, more so on Indira who says she has lost a lifeline. But she finds solace in her grandchildren.

“I used to worry about her so much. She would drive back home so late every night … But she would always send a message once home. On the day of the murder, I got a call from a neighbour saying Gauri had collapsed at her house. Esha (Kavitha’s daughter) and I went to the spot. All through the 15 minutes, Esha kept telling me to take deep breaths. I thought she must have fainted for not having eaten properly,”  Indira says.

“I have to be happy when I’m with them. I am trying my best to hide my tears from them. Nights have become very difficult for me. There have been many sleepless ones,” she says.Speaking about the investigation, she commends SIT officer B K Singh and says, “He’s become like a family member. He had told me that there has been not a single failed case in his life and if this one goes failed then it would be the first one. I pray every day that he never fails. Today, I am extremely glad that they have almost cracked the case,” she adds.