With 14 arrests so far across Karnataka and Maharashtra, the Special Investigation Team (SIT) of about 23 officers is set to submit its official report to the Karnataka government.

BENGALURU: On September 5, 2017, four bullets were pumped into journalist Gauri Lankesh.  Now, a year on, the Karnataka police claim to have almost cracked the case. With 14 arrests so far across Karnataka and Maharashtra, the Special Investigation Team (SIT) of about 23 officers is set to submit its official report to the Karnataka government.

After the crime was committed, police recovered a few CCTV camera footages of two bike-borne men  wearing a black jacket and a helmet. While the images showed one man pumping bullets at Gauri, the other waited for his accomplice to be back. The government soon after constituted an SIT to investigate the case.

To rule out any professional or personal rivalry, police began to interrogate different people. Once this was ruled out, a team of about 200 SIT officers and others began to track right-wing groups to look for the link between Gauri’s killing and the Kalburgi case.

The CID team, which had worked on Kalburgi’s case, was also made part of the probe and asked to compile a list of all the possible men from right-wing groups operating in Karnataka. The list threw up over 300 people. A majority of them were from groups like Sri Rama Sene, Sanatan Sanstha and Hindu Janajagruti Samiti operating in Karnataka, Maharashtra and Goa. Police then set out to track the killers and soon realised there must be a link to the killings of Gauri, Kalburgi, rationalist Narendra Dabholkar and author Govind Pansare.

READ | I have lost my lifeline with her death, says Gauri's mother Indira Lankesh

“We analysed over 1.5 crore calls but got nothing. It was then we realised that Gauri’s killers were not using mobiles. Our interception of phone calls around that time did give one important lead,” said an SIT officer.

“On November 2017, we picked up a conversation between one K T Naveen Kumar (37) alias Hotte Manja and a friend,” said an SIT officer. Naveen, based in Chikkamagaluru district and the founder of Hindu Yuva Sene, had participated in programmes of the Hindu Janajagruti Samiti and the Sanatan Sanstha. He had told his friend that he had gone underground after Gauri’s murder.

They tracked his activities and monitored his calls from mid-November, 2017 to February 2018. They found that he was talking to another friend Praveen, who used only coin booths to talk to Naveen.

The police, during the interception of calls, realised that the next target was Mysuru-based rationalist K S Bhagawan. The SIT, however, wanted to wait till both the men met and then arrest them. But once the plan to kill Bhagawan was set in motion, the SIT was forced to arrest Naveen.

Meanwhile, Praveen was supposed to attend a wedding of an activist, Mohan Gowda, of Hindu Janajagruti Samiti in Brahmavar on February 25.  “Unfortunately, a media channel broke the story of Naveen’s arrest and the SIT’s plan to arrest the other accused at the wedding. Or else, we would have cracked the case at least three months earlier,” an officer said. 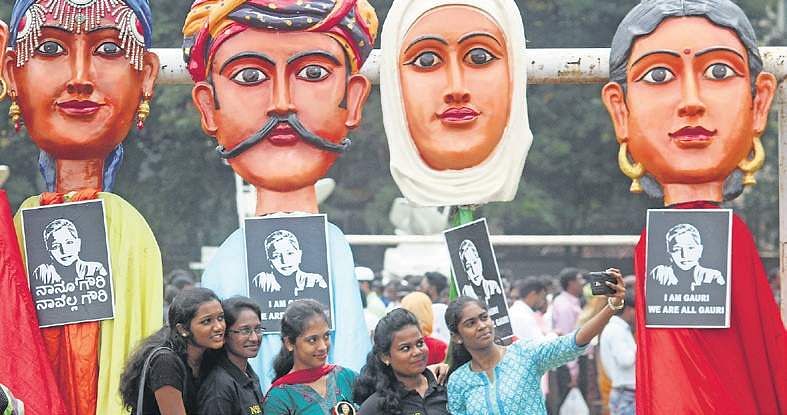 A police inspector with Upparpet police station arrested Praveen alias Sujeet Kumar in connection with an illegal arms case in May, 2018.

“This was the major breakthrough after Naveen’s arrest in February,” said a police source.

A diary was recovered from Praveen in which police found several phone numbers and code names alluding to others involved in the plot. The diary also had sketches of routes to Gauri’s house. and other bits of information mentioning Amol Kale alias ‘bhaisab’, Amit Degwekar alias ‘tamatar’ and Manohar Edave.

READ | Gauri Lankesh is no more, but her words are etched in our minds: Prof VS Sreedhara

Based on a tip-off that they were travelling in a Toyota Innova from Pune towards Karnataka, police chased and arrested the trio in Davangere. All three were unknown to the police. Naveen Kumar, according to SIT, met Kale and Edave at the Sanatan Sanstha conference in Goa where he reportedly claimed to have ammunition and guts to do anything for the sake of Hindutva. When Kale found that Naveen didn’t have ammunition, he was assigned to do a recce of Gauri’s house.

Police were shocked to find nearly 28 mobile handsets, all dismantled, in Amol Kale’s car. They also found two diaries: one from Kale and the other from Edave. These diaries led to major arrests and also helped the Maharashtra ATS and local police crack the killings of Dhabolkar and Pansare and arrests of five right-wing leaders who had allegedly planned terror attacks in Mumbai.

Kale, along with ‘dada’, who is yet to be arrested, would look for innocent young boys who are fanatical about Hindutva, but are not so popular amongst police. The men went to Sindagi to meet Parashuram Waghmare, 26, who was out of prison after being accused of hoisting a Pakistani flag in Sindagi. He was shown videos of Gauri and was indoctrinated that she is anti-Hindu and should be killed. He was trained along with others at a resort in the jungles of Chikkale and Kanakumbi.

After Waghmare’s arrest on June 11, police were surprised to see that he wasn’t shocked at all. “He told us I knew you would come for me and yes, I was the one who killed Gauri,” recalled the officer.  It was then that all four murders were linked and the CBI — investigating Dabholkar’s killing and the Maharashtra SIT — probing Pansare’s murder, were involved along with Karnataka’s CID probing Kalburgi’s killing and Gauri murder case by Karnataka SIT began working together.

Later, Sachin Prakashrao Andure from Maharashtra was arrested. Later came the arrests of five right wingers in Maharashtra wherein a huge cache of explosives were recovered. Following this arrest, Dabholkar’s murder was reportedly cracked. The CBI now has taken custody of Kale.

The SIT has recovered 17 pistols along with one black pistol, which they suspect could be the weapon used for the killings of Gauri, Kalburgi and Dhabolkar. One bike was also recovered from Pune.