Flood of misery, but no cabinet in place

Bureaucrats running the show; villages in six assembly constituencies don’t even have an MLA

BENGALURU: Incessant rainfall and rising water body levels coupled with the heavy release of water from dams of neighbouring Maharashtra have rendered dozens of villages in more than five districts marooned. Extremely heavy rain is predicted over the next three days in Uttara Kannada, Dakshina Kannada, Udupi and Chikkamagaluru and heavy rainfall in Belagavi, Haveri and Hassan.

And through all of this, a flood-hit Karnataka is dependent only on its bureaucrats to save itself. With no ministry in place and hence no district in-charge ministers, and Chief Minister B S Yediyurappa camping in New Delhi, bureaucrats led by Chief Secretary T M Vijay Bhaskar have been managing the State that has been ravaged by flood even before it recovers from the severe drought.

Before flying off to New Delhi, Yediyurappa held a meeting of District Commissioners via video conferencing and then conducted an aerial review of the affected areas. From then on, it has been bureaucrats managing the show in a State that is currently a one-man-show government. Marathon meetings are being held by the Chief Secretary to review rescue and rehabilitation efforts that have been entrusted to the District Commissioners.

If the lack of ministers wasn’t bad enough, at least six worst-hit assembly constituencies do not even have an MLA after their elected representatives were disqualified under the anti-defection law  in July. “Athani, Chikkodi, Raybag, Nippani, Kagwad, Hukkeri, Gokak, Mudalagi, Savadatti and Ramadurga have been severely affected by 90,000 cusecs and 6000 cusecs water released from Hidkal and Navalateertha reservoirs respectively. The current scenario seems like it could become a repeat of the 2005 flood situation,” said a press release from Belagavi district administration. Incidentally, three of these affected regions-- Kagwad, Athani and Gokak --have no MLAs currently after Shrimanth Patil, Mahesh Kumathalli and Ramesh Jarkiholi -- were disqualified.

Heavy rains led to the district administration in Haveri to shut down schools and colleges across the district. BC Patil and R Shankar- two former MLAs who were disqualified represented Hirekerur and Ranebennur constituencies of Haveri. Incessant rains have been lashing Yellapur- - another constituency whose MLA Shivaram Hebbar was recently disqualified.

After taking oath as CM, Yediyurappa was only able to get the finance bill- --that he chose to present as vote-on-account for three months-- passed in the assembly. Unable to use central funds at a time of crisis, deposits in District Commissioners’ PD accounts are being utilised for relief. 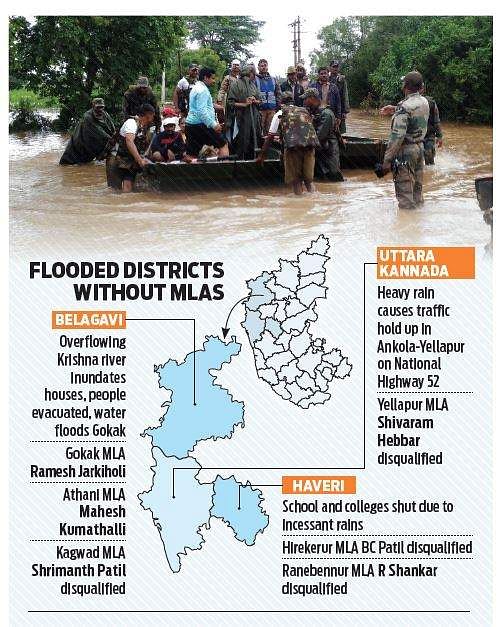 Now we are on Telegram too. Follow us for updates
TAGS
Karnataka cabinet Heavy rainfall monsoon BJP Yediyurappa