MADIKERI: Many villages across Kodagu district have turned into islands with both the Cauvery and Lakshmana Theertha rivers in spate owing to continuous heavy rainfall. Relief centres have been opened in villages of South Kodagu, Madikeri, Kushalnagar and Somwarpet taluks.

“Encroached river banks, unplanned towns have led to these floods, which is new to the people of South Kodagu. The rich encroach the river banks and build layouts and the poor are made to suffer,” said Thayamma, a resident of Mukunda Layout in Gonikoppal. More than eight layouts in Gonikoppal town have been submerged by the Keerehole and residents of these layouts have been shifted out to nearby relief centres.

“Gonikoppal town has been cut off. All connection via main roads have been lost and the only way out is through Arvathoklu village road,” explained Jagadish, a local. The town has lost connectivity to Madikeri and Ponnampet as all the roads are filled with over three feet of water. Areas in Ponnampet too have been submerged.

Villages in South Kodagu including Harihara, Balyamanduru, Balele, Kanuru, Nitturu, Kottageri are inundated as the Lakshmana Theertha river is overflowing. About 65 people were reportedly stranded since Thursday morning at Nidugumba limits of Kanuru village.

While the villagers frantically tried to get in touch with the police control room and the district administration, rescue efforts were delayed due to the shortage of boats. “The rescue operation at Nidugumba has been the toughest. It is highly risky to reach the spot as the current is strong,” said MLA K G Bopaiah, who was overseeing the rescue operations by an NDRF team. The Cauvery river is in full spate at Bethri and Napoklu has been cut off. 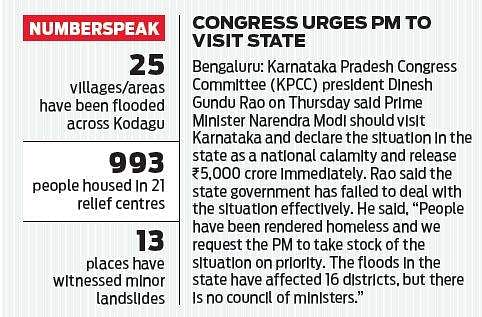 Now we are on Telegram too. Follow us for updates
TAGS
Kodagu Karnataka monsoon