Belagavi , Dakshina Kannada, Udupi, Shivamogga to name a few; Hassan issued Orange alert; at least 16 districts out of 30 have been receiving heavy downpour

BENGALURU: The State Disaster Management has issued a Red alert for some districts, especially in North Karnataka and Coastal region. At least 16 districts out of 30 have been receiving heavy downpour for the past couple of days. 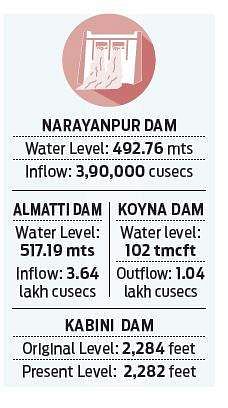 The state did not see much rain in the first week of June when the Southwest monsoon started. However, just after over two months, many districts received heavy rain.

Belagavi, Dakshina Kannada, Udupi, Shivamogga and other districts are on Red Alert, which means they are receiving more than 204.4 mm of rain. The Orange alert has been issued for Hassan, which is receiving 115 mm to 204.4 mm. Mysuru, Chamarajanagar, Haveri and other districts fall under the Yellow category where rainfall is between 64.5 mm and 115.5 mm.

Speaking to The New Indian Express, Karnataka State Natural Disaster Management Centre (KSNDMC) Director Srinivas Reddy said, North Karnataka region is witnessing flood for two reasons — one is heavy downpour and the other is increase in inflow from reservoirs which are close to these districts.

“It is peculiar that a district like Vijayapura is not witnessing heavy rainfall, but it is flooded due to increase in inflow from the Almatti reservoir. Likewise, authorities have released one lakh cusecs of water from Ghataprabha and Malaprabha resrevoirs. This has compounded the flood effect in Belagavi and Bagalkot. These places are put on alert,’’ he said.

North Karnataka districts which were facing drought last year, witnessed heavy rain this year. This is the highest after 2009 in these districts. The Deputy Commissioners have been told to take care of drinking water, road connectivity and also at relief centres.

Now we are on Telegram too. Follow us for updates
TAGS
Red alert Karnataka monsoon heavy rain North Karnataka