In places wherever the electric infrastructure has been submerged, the power is still shutdown. 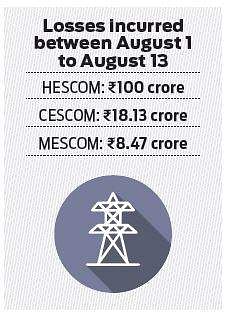 HESCOM which caters to Dharwad, Gadag, Haveri, Uttara Kannada, Bagalkote, Belagavi and Vijayapura, alone has recorded a loss of Rs 100 crore since August with major impact in Belagavi and Bagalkot.

In a press statement released by them on Wednesday, General Manager Technical officer, Belagali said,” As many as 1,382 villages in this region had lost power due to the rains and HESCOM has made an effort to restore it in at least 1,121 villages. Power has been restored immediately in largely populated villages, relief centres in different districts, primary health care centres, drinking water plants etc.

However, due to the standing water in the electric substations, they have stopped working temporarily. In such cases, employees are trying to find an alternative solution to provide electricity. “

Some of the house owners have voluntarily come forward to get the electric power supply disconnected temporarily. Once they discharge the rainwater from their homes, power will be restored. A total of 15,332 complaint calls were received on the 1912 helpline from August 1 to August 13.

In places wherever the electric infrastructure has been submerged, the power is still shut down.“HESCOM officials have already got the necessary components to restore the damaged poles,” he added.

Now we are on Telegram too. Follow us for updates
TAGS
HESCOM MESCOM CESCOM Karnataka floods