State Congress leaders on Tuesday slammed the government for failing to provide relief to people in flood hit regions in the state.

BENGALURU:  State Congress leaders on Tuesday slammed the government for failing to provide relief to people in flood hit regions in the state. On Thursday, the party workers will stage a demonstration in Bengaluru to protest against the government’s failure to reach out to the affected, Karnataka Pradesh Congress Committee president Dinesh Gundu Rao said. 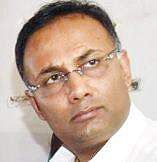 “Government has completely failed to help the people and it has not even called for an all party meet to discuss the issue. If the same situation continues, we will protest in New Delhi as well,” he said. Rao also came down heavily on the BJP’s decision to appoint three Deputy Chief Ministers. “Differences among the BJP leaders in the state has increased after portfolio allocation,” Rao said.

Congress leader and former MP VS Ugrappa said many senior leaders in the BJP, including Jagadish Shettar, R Ashok, CT Ravi and B Sriramulu have been sidelined by their party high command and they should resign and exit  the government.