BENGALURU: Pointing out several ‘flaws’ present in the Draft National Education Policy (NEP)- 2019, private school associations have sought two-month extension for the deadline to submit feedback. Feedback, as of now, has to be submitted before June 30. “The government owes private schools a lot of money for offering RTE seats to children in the age-group of 6 and 14. The NEP has proposed to extend it to children in the age-group of 3 to 18 years. But it is still unclear how does the government plan to fund that,” said Shashi Kumar D, general secretary, Associated Management of Primary and Secondary Schools in Karnataka. 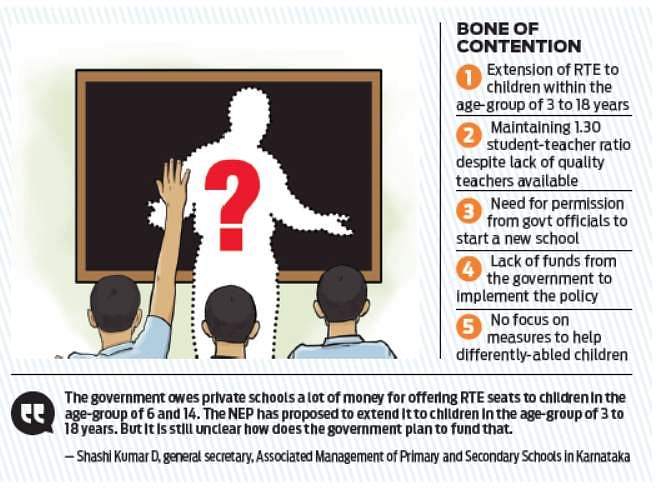 Proposal of teacher-student ratio of 1:30 has also turned out to be a bone of contention. “Over 90,000 government schools have only one teacher for all subjects at elementary and secondary level. There is no plan on how to implement the proposed ratio. There is talk of digitisation in the policy. However, one in every four rural schools does not even have electricity,” he added.

Advocate Divya Balagopal told The New Indian Express,” According to the draft policy, owners of new schools must share details of land, building and teachers. The same has to be confirmed by the school management committee, a CA and the local panchayat or ward. Existing schools also need to be accredited by the state school regulatory authority, two peer schools and the SMC.”

“Asking for permission from local government officials has, however, not been a smooth experience for us. It will provide a money-making opportunity to them,” added Nooraine Fazal, CEO and Managing Trustee of Inventure Academy.

Lack of clarity on how to improve education facilities for differently-abled students was another point raised by educators at a symposium held on Saturday. The policy also segregates the grades into four sections, that is, nursery to grade 2, 3 to 5, 6 to 8 and 9 to 12. “The purpose of dividing the grades into sections was to have different methods of teaching and age-appropriate curriculum, and not change the school structure,” clarified MK Sridhar, member of the drafting committee.

Admitting that there is a shortage of teachers, he said that the proposal also looked at increasing spending on education in the annual budget from 11 per cent to 20 per cent. Responding to a point raised on 45 subjects suggested for secondary level, he said that the number could be reduced.

Now we are on Telegram too. Follow us for updates
TAGS
NEP National Education Policy Private schools