Shivarame Gowda said that despite nursing hopes of contesting again from the constituency, he has no option but to accept the party’s decision.

BENGALURU: Chief Minister H D Kumaraswamy’s son Nikhil Gowda’s candidature for Mandya Lok Sabha seat has pretty much sealed the fate of incumbent JD(S) MP L R Shivarame Gowda. JD(S) supremo H D Deve Gowda’s announcement of Nikhil’s candidature has kicked up a storm at the grassroots level
Speaking to The New Indian Express, Shivarame Gowda said that despite nursing hopes of contesting again from the constituency, he has no option but to accept the party’s decision. While Shivarame Gowda is naturally disappointed and feels helpless, the youth wings of the party are critical that Nikhil is being para-dropped into the political arena.

Shivarame Gowda who was elected from the seat for barely five months is now preparing to campaign for Nikhil.  “I had not contested to be an MP just for five months. I had hopes of getting an opportunity again but party seniors have taken a call. There is no final decision just yet but Deve Gowda and Kumaraswamy have told the media that Nikhil will contest from Mandya,” said Shivarame Gowda. 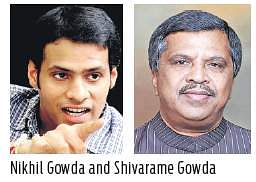 “I don’t know if the decision is acceptable to the party workers but we have to follow our leaders’ decision. I will campaign with Nikhil and that is the only option I am left with,” the MP said. Not everybody in the party has, however, taken kindly to the JD(S) first family para-dropping another of its member.

INTERVIEW | Anyone can contest in a democracy: Nikhil Gowda

“It is unfair to field someone who has no real work to show for the party. Leaders who have worked loyally for the party years together are being sidelined to make way for another family member,” said a senior party leader. Another party leader from Old Mysuru region pointed out that the way Deve Gowda and Kumaraswamy went about announcing Nikhil’s name was wrong. “Local leaders were neither consulted, nor taken into confidence,” said a former party legislator.

Former Congress MP and actor late Ambareesh’s wife Sumalatha’s possible entry into the fray is only expected to make matters worse for the party. “We can’t blame the cadre for their anger.  They are right in being disappointed. The leaders are doing little to placate them. If this continues, Sumalatha who may contest as an Independent will not only get Congress votes but also split the JD(S)’ vote share,” said a senior leader of the JD(S).

Now we are on Telegram too. Follow us for updates
TAGS
Shivarame Gowda Nikhil Gowda Mandya MP JD(S) Mandya constituency